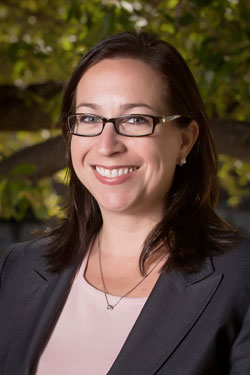 As the Director of Public Service, Laura is responsible for developing and expanding the Public Service placement opportunities for law students to complete their 30 hour public service graduation requirement.  She also counsels students on finding public service internships and post-graduate fellowships while assistsing in securing funding and scholarship opportunities.

As the Director of Academic Support, Laura administers the Academic Success program, which provides skill building workshops and small group tutorial sessions to law students to maximize the success of their transition into the rigors of law school. She also oversees a bar preparation program for graduating students.

Laura earned her Bachelor of Arts in 1998, magna cum laude in Historical Studies at the University of Texas at Dallas and graduated with her Juris Doctor from Georgetown University Law Center in 2002.  After graduating, she worked as a Staff Attorney for the University of Michigan Law School in a family violence clinic representing victims of domestic violence with divorce, custody, support, and protective order cases.  She then became the Director of the Legal Services Program at Mosaic Family Services, a community-based nonprofit in Dallas, Texas.  At Mosaic, she provided immigration and family law representation to immigrant victims of violent crimes and specialized in assisting immigrant victims of human trafficking.  She has been an invited speaker and panelist at several national conferences on the issues of human trafficking, working with immigrant victims of violent crimes, and collaborating with law enforcement task forces.  She joined SMU Dedman School of Law as the Director of Public Service and Academic Support in December 2013.