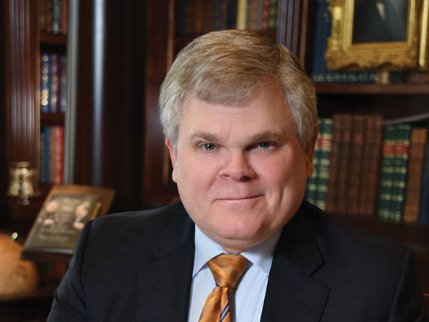 Bryan A. Garner, a noted speaker, writer, and consultant regarding legal writing and drafting, regularly teaches a seminar on Advanced Legal Writing at the law school. Garner is editor in chief of BLACK'S LAW DICTIONARY and the author of many leading works on legal style, including A DICTIONARY OF MODERN LEGAL USAGE, THE ELEMENTS OF LEGAL STYLE, THE REDBOOK:  A MANUAL ON LEGAL STYLE, THE WINNING BRIEF, and THE WINNING ORAL ARGUMENT His latest books are READING LAW:  THE INTERPRETATION OF LEGAL TEXTS and MAKING YOUR CASE:  THE ART OF PERSUADING JUDGES, both cowritten with Justice Antonin Scalia, and GARNER ON LANGUAGE AND WRITING, an anthology published by the American Bar Association. His magnum opus is the 897-page GARNER'S MODERN AMERICAN USAGE, published by Oxford University Press. It is widely considered the preeminent authority on questions of English usage.

Prof. Garner received an Honorary LL.D. from Thomas M. Cooley Law School in 2000; a J.D. from the University of Texas at Austin in 1984, where he was an Associate Editor of the Texas Law Review; and a B.A. from the University of Texas at Austin in 1980, with Special Honors in Plan II. He is President of LawProse, Inc., the foremost provider of CLE training in legal writing, editing, and drafting. His many professional activities include service on the Board of Directors of the Texas Law Review Association and on the Editorial Advisory Boards of The Copy Editor and The Green Bag, and as a consultant to the Oxford Dictionary Department in Oxford, England. Prof. Garner has received the 2005 Lifetime Achievement Award in Plain Legal Language, the 2000 Scribes Book Award for Research and Writing (for BLACK'S LAW DICTIONARY, 7th ed.), and the 1998 Outstanding Young Texas Ex Award, as well as many other honors and awards.