The Judge Elmo B. Hunter Legal Center for Victims of Crimes Against Women

Made possible by a generous gift from Ray L. and Nancy Ann Hunter Hunt. The Hunter Legal Center is named in honor of Mrs. Hunt’s father, a distinguished Missouri state and federal judge.


About Judge Elmo B. Hunter 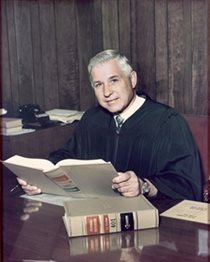 On the day Pearl Harbor was attacked, Hunter enlisted in the U.S. Army, where he served in U.S. Army Intelligence throughout World War II. Returning to Kansas City, he worked for the Honorable Kimbrough Stone of the Eighth Circuit Court of Appeals. He left to serve as Senior Assistant City Counsel, City of Kansas City, Missouri, after which he worked as Special Assistant U.S. Attorney to prosecute war fraud cases.

He subsequently became one of four founding partners of the renowned law firm Sebree, Shook, Hardy and Hunter, known today as Shook, Hardy and Bacon. He left a thriving law practice to serve 14 years as a State District Judge in Missouri and later as Presiding Judge for the Missouri Court of Appeals. He sat by Special Appointment on the Missouri Supreme Court.

In 1965 Judge Hunter was appointed to the Federal Bench by President Lyndon B. Johnson, becoming the youngest Federal Judge in the United States. He subsequently sat by Special Appointment on numerous United States District Courts and Court of Appeals panels throughout the United States and Puerto Rico.

Judge Hunter was a member of the American Judicature Society and was the only member in its history to serve both as its Chairman and President. In 1991 the Elmo B. Hunter Citizens' Center for Judicial Selection was formed to further the American Judicature Society's historic interest in judicial selection issues. Throughout his career, he was a tireless advocate for judicial merit selection and public education concerning the U.S. Federal and State Judicial System of the United States.

Judge Hunter was an active member of numerous civic boards and committees throughout his life, including service as Police Commissioner on the Kansas City Police Board. In addition, he valued the importance of higher education and served as Trustee of the University of Missouri, and was a member and Chairman of the Board of Trustees of the College of the Ozarks.

He was married to Jane Ann Williams of Kansas City, Missouri, who died in 1949, and they had one daughter, Nancy Ann Hunter. He was married to Shirley Arnold Hunter for 51 years at the time of his death in 2003. 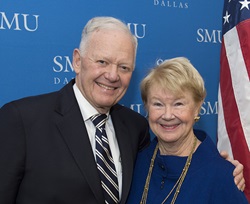 Nancy Ann ’65 and Ray L. Hunt ’65 are longtime contributors to community organizations that empower individuals to transform their lives.

Nancy Ann Hunt taught in elementary school before focusing more fully on community service, devoted in particular to the well-being of women and children. Though she prefers working behind the scenes, numerous organizations have recognized her leadership with awards. Among them are the Boy Scouts of America’s Silver Beaver Award, Robert S. Folsom Leadership Award of the Methodist Health System Foundation, Women’s Center of Dallas Maura Award, and the Genesis Women’s Shelter Jane Doe Award. She is chair-elect of the board of New Friends New Life, which helps victims escape the sex industry and build new lives for themselves and their children. Among numerous activities for SMU, she serves on the executive board of the Annette Caldwell Simmons School of Education and Human Development.

Ray L. Hunt is chairman, president and CEO of Hunt Consolidated, Inc. Mr. Hunt’s service to SMU has been multifaceted. He chaired the Board of Trustees after its restructuring in the late 1980s and now serves on the Board’s Trusteeship Committee and Executive Committee. Working with other SMU trustees and President Turner, he was instrumental in attracting the George W. Bush Presidential Center to SMU and serves on the Bush Foundation board. Elected to the Texas Business Hall of Fame in 1992, he received the first J. Erik Jonsson Award of the Greater Dallas Chamber of Commerce and was selected for the Linz Award, honoring humanitarian service. Mr. Hunt also received the Order of Marib Award from the Republic of Yemen, the only non-Yemeni to be so designated.

Judge Elmo B. Hunter Legal Center for Victims of Crimes Against Women

Resources for the Public