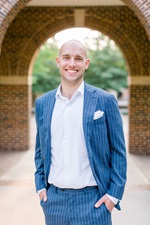 1. Tell us about yourself.
I grew up in Austin. After high school I spent over a year volunteering in Sierra Leone and Togo with Mercy Ships, a Christian NGO which operates the world’s largest civilian hospital ship. When I came back to Texas, I worked my way through community college by flipping burgers at In-N-Out, before transferring to the University of Southern Mississippi. At Southern Miss I met my wife Courtney and graduated with a triple-major and triple-minor. Following college, I worked in and around Texas politics and government for a few years before Courtney and I decided we would attend law school together. What we didn’t count on was ending up in the same section, but things worked out alright in the end!

2. Why did you decide to come to SMU Law?
Courtney and I wanted to stay in Texas for law school. Most of our family is here and we wanted to stay close by. We applied to each law school in Texas, but particularly liked SMU’s campus and the people we met while touring. Once I was awarded the Hatton W. Sumners Scholarship, SMU Law was the clear winner.

3. What has been your favorite class and why?
Very difficult to pick just one class here, so I am going to hedge and pick three: one for each year of law school. My favorite 1L course was Torts with Professor Bavli. My favorite 2L class was Creditor’s Rights with Judge Harlin Hale. And my favorite 3L class was Advanced Contracts with Professor Glenn West, a long-time Weil partner who taught the seminar as an adjunct. Though covering different materials, each of these classes contained the same basic ingredients: a professor who deeply cared about their subject and their students, significant intellectual rigor, and an opportunity to creatively and imaginatively use the law once you understood the basics.

4. When you are not in school or studying, what do you do for fun?
Read. More than anything else I love reading and fill up most of my free time with it. Mostly business history, military history, and linguistics. Otherwise, I do a lot of running and rucking to stay in shape for the Army. During 3L I have also tried to acquire a couple new skills. I have been cooking my way through Mark Bittman’s How to Cook Everything: The Basics, much to the amusement of my wife. And her and I have started taking golf lessons together, which has been fun.

5. What extracurricular activities have you enjoyed most and why? (ROTC, SBA, moot court, etc.)
My two favorite extracurricular activities have been ROTC and mock trial. ROTC has been a significant time commitment, but well worth it: I have dreamed of being an Army officer since I was a child hearing stories from my father and grandfather about the military. And I have always felt that all citizens in our Republic have a responsibility to serve their fellow citizens as best they can. For me, that was joining the military. Plus, ROTC (and serving as an enlisted cadet in the Army National Guard since 2L) was a nice break from law school: spending time each week with different people studying a different subject was an enjoyment in itself. While you have to stay on top of your time, I would encourage any students interested in commissioning as an officer to explore ROTC as one option. And that goes for commissioning as a JAG or not—I actually commissioned as a military intelligence officer.

6. How has law school challenged you most?
Both the biggest challenge and the biggest reward of law school was attending it with my wife, Courtney. We had been married for about two years before attending. During our time together we had experienced two political campaigns, two legislative sessions, and what we felt was a significant amount of stress. None of it compared to our first year in law school together. We were in the same section, on the same curve, competing for the same grades. At one point we interviewed at the same law firm, me in the morning and her in the afternoon. And we are both type-A, extremely competitive people. As you might imagine, it was an intense year.

Ultimately, we had to make a commitment to love each other as Christ has called us to: unconditionally, sacrificially, and in a spirit of humility. We vowed to see each other’s success as our own and to support each other even if it meant our own grades or job prospects or other opportunities might suffer. Seeing our marriage get stronger and stronger throughout law school ended up being by far the most rewarding outcome of all.

7. What has been your most memorable law school moment so far?
The most memorable moment was graduation. Because Courtney graduated immediately before me, she was able to turn around and hood me as a family hooder. Hearing Dean Yeager say the words “John Daniel Rimann, hooded by his wife Courtney E. Rimann, class of 2022” was a moment that will stick with me for the rest of my life!

8. What do you plan to do post-graduation?
Following the bar, I will join the Dallas office of Gibson Dunn & Crutcher, before clerking for a federal district judge in a couple years. On the Army side, I will join the Oklahoma National Guard’s 45th Infantry Brigade Combat Team as a military intelligence officer.

9. Have you had any important mentors during law school? If so, who?
My most important mentors in the law school were Professor Hillel Bavli and Judge Harlin Hale, whose courses I took and whose advice and insight I have greatly benefitted from, and Judge Brantley Starr, who I had the wonderful opportunity to work for through the Federal Judicial Externship program. Outside the law school, my most important mentors were former Texas appellate justice Michael Toth, whose judicial election campaign I had the opportunity to manage prior to law school, and SMU alum Barry McBee, who along his wife Susanna have been incredible mentors to Courtney and I since well before we came to SMU.

10. Where do you see yourself in 5 and 10 years?
In five years, I think I will still be working at my firm, or perhaps becoming a federal prosecutor. And in the Army, I will be looking at a promotion to Captain and considering what my long-term future role will be. In ten years, I really could not say. Even five years feels far away right now!