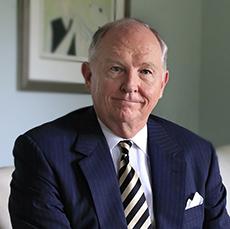 Former U.S. Ambassador to Saudi Arabia, Robert W. Jordan is Diplomat in Residence and adjunct professor of political science in the John G. Tower for Public Policy and International Affairs at Southern Methodist University. He served as U.S. Ambassador to Saudi Arabia from 2001-2003.  He took charge of his mission in the wake of the attacks of September 11 at a critical time in the U.S.-Saudi relations. He worked closely with President George W. Bush and senior government officials in maintaining the relationship with Saudi Arabia, combating terrorism, and promoting economic reform and human rights in the Kingdom. He spearheaded American encouragement of the Saudi economic reforms necessary to qualify for accession to the World Trade Organization. He was partner in the international law firm Baker Botts L.L. P. for many years and headed the firm's Middle East practice based in Dubai until his retirement in 2014.

He is Vice Chair of the SMU Tower Center Board of Directors. He is a member of the Council on Foreign Relations and a past president of the Dallas Bar Association and the Dallas Committee on Foreign Relations. He is a member of the Panel of Distinguished Neutrals of the CPR International Institute for Conflict Prevention and Resolution. He also serves on the Advisory Board of the Bilateral U.S.-Arab Chamber of Commerce and is a frequent commentator with international media including CNN, Fox News, MSNBC, CNBC, Bloomberg and the New York Times. His memoir, Desert Diplomat: Inside Saudi Arabia Following 9/11, was published by Potomac Books in 2015.

University of Oklahoma College of Law