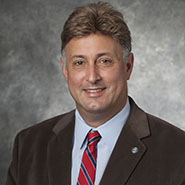 Ray Rafidi has been with SMU since August 2008, first having served as a Dedman College Degree Counselor, prior to joining the Tower Center as Associate Director in March 2012. Cumulatively, he has over 18 years of experience in higher education, which includes service in university development and advancement, student affairs, student finance, and academic advising and counseling. Mr. Rafidi holds a B.A. in Political Science from the University of Louisiana at Lafayette and an M.A. in Middle Eastern Studies from the University of Arizona. He served as a Fellow in the U.S. Congress, working closely with a legislative director on Middle Eastern issues that included the Afghan-Soviet conflict and the Lebanese civil war. He studied intensive Arabic at Georgetown University and on a Foreign Language Area Studies Scholarship at the University of Washington. He is a member of the Middle East Institute, the Middle East Studies Association of North America and the World Affairs Council of Dallas-Fort Worth.