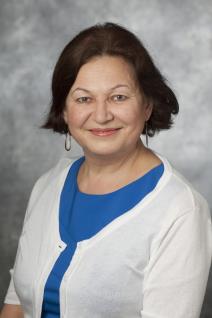 Dr. Tatiana Zimakova has served as the Area Chair at SMU since 2003. She earned her M.A. degree at Moscow State University and a Ph.D. from the Russian Academy of Sciences. She completed post-doctoral work at the University of Michigan as an SSRC - MacArthur Foundation fellow. She currently teaches three levels of Russian language classes and Russian Culture course. She directed the SMU-in-Moscow program (from 2007 to 2014) and she has designed and currently directs the SMU-in-Prague program, an ongoing collaboration between the Lyle School of Engineering and Dedman College.

Tatiana is passionate about engaging students in interactive and applied learning. She brings her expertise as a language instructor and distance learning specialist, as well as interpreter and manager of international projects to SMU Russian Area Studies. Her past experiences include working as a consultant and specialist of “Russian World” language and culture program at the Dallas Schools Television; researcher and interpreter at UNICEF (Florence); manager and director of the Russian American projects sponsored by the U.S. Agency for International Development (NASW, Washington, D.C.); trainer and translator at the International Research and Exchange Board (IREX, Moscow), World Bank (Washington, D.C.), and Acclivus Corporation (Dallas). She is the founder and president of the Russian American Center in Dallas, a non-profit educational and cultural organization.

Dr. Zimakova has published more than 50 articles and book chapters. She has written both textbooks and scripts for Russian language and culture videos. In 2007, she was nominated for the Lone Star Emmy Award as a Russian Instructor/Coordinator. “Russian World”, the program that she and her colleagues have worked on for the Dallas Schools Television, has become one of the most popular educational programs on YouTube and has reached about 5 million views.