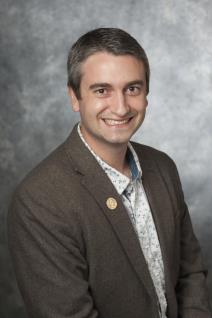 Dr. Constantin C. Icleanu joined World Languages and Literatures in Fall 2017 as a lecturer in Spanish.  Constantin is a specialist in 20th- to 21st-century peninsular literature and cinema and 20th- and 21st-century Latin American literature and cinema with an emphasis in migration and transnational studies. He previously taught Spanish at the University of Kentucky, Wilmington College, and at Brigham Young University.

His dissertation, "A Case for Empathy: Immigration in Spanish Contemporary Media, Music, Film, and Novels" (2017) analyzes the representations of immigrants from North Africa, Latin America and Eastern Europe in Spain. As engaged scholarship, it seeks to better the portrayal of immigrants in the mass media through the study of literature, film and music about immigration spanning from the year 2000 to 2016. Because misconceptions continue to propagate in the media, this dissertation works to counteract anti-immigrant, xenophobic representations as well as balance out overly positive and orientalized portrayal of immigrants with a call to recognize immigrants as human beings who deserve the same respect, dignity and rights as any other citizen. For a more detailed review of Dr. Icleanu's scholarship, please see his personal website.