New course at Perkins draws on connections between athletics, theology

Where ultimate concerns brush up against the national pastime, Mark Stamm can be found, thinking it all through and possibly wearing a baseball cap.

Stamm, professor of worship at Perkins, is an admitted baseball “super fan.” He belongs to the Society for American Baseball Research – Ernie-Banks-Bobby Bragan DFW Chapter – and has seen games in all 30 Major League baseball parks.
He also has explored, in scholarly writing and even in liturgy, how baseball and other sports connect with culture and Christian faith.
“Our task theologically is to name both the goodness and the corruption and also to say, `OK, where do we go from here?’” he said.
Stamm’s latest pursuit of the question comes in “Sports and Spirituality,” a new seminar elective at Perkins. It features a wide-ranging reading list and impressive guest speakers. 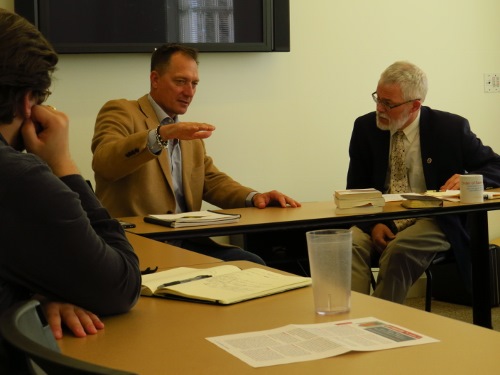 Stamm hit one over the fence by getting Jeff Banister, Texas Rangers manager, to speak to the class in February.

Banister shared personal challenges (including a career-threatening injury as a teen, and a long climb to managing in the Majors) and noted his refusal to use prayer as an “ATM.”

“God doesn’t care if we win, I can tell you that,” said Banister, 2015 American League manager of the year. “Look, this game has a cruel sense of humor, and I don’t think God has anything to do with that.”

Stamm grew up in Pennsylvania, a United Methodist preacher’s kid. He loved playing sports, but also reading about sports and poring over even the minor league baseball statistics in The Sporting News. He so loved APBA, a baseball simulation board game, that he played by mail with other obsessed boys.

He would find his call to ministry and academia, becoming a United Methodist elder and earning a Th.D. at Boston University. At Perkins, where he joined the faculty in 2000, he has taught a range of classes, overseen chapel services and written articles and books, including Devoting Ourselves to the Prayers, A Baptismal Theology for the Church’s Intercessory Work (Discipleship Ministries).

The passion for sports, especially baseball, has never subsided. His Perkins office has an All Star team’s worth of Major League baseball hats, as well as theological texts and a John Wesley portrait. He attends about 20 Rangers home games a year.

In the fall of 2007, Stamm’s half-joking suggestion that Perkins should have a chapel service giving thanks for baseball was taken up enthusiastically by fellow worship committee members. On April 2, 2008, timed roughly to the Major Leagues’ opening day, Perkins had such a service. For it, Stamm wrote and delivered what surely was the first Baseball Berakah, a benediction in the Judaic tradition that gave thanks for God’s gift of play and specifically for baseball. The prayer also called for repentance for corrupting influences, such as performance-enhancing drugs.

“That was a turning point for me, writing that prayer,” Stamm said, explaining that the exercise forced him to explore more seriously the theological dimensions of play.

Stamm would go on to write a scholarly paper titled “Pray Ball: Reflections on the Serious Liturgical Challenge of Giving Thanks for Baseball.” Though it would eventually be published it in Doxology: a Journal of Worship, he first presented it at Cooperstown, N.Y., at the Major League Baseball Hall of Fame, for a symposium on baseball and American culture.

Reflection at the nexus 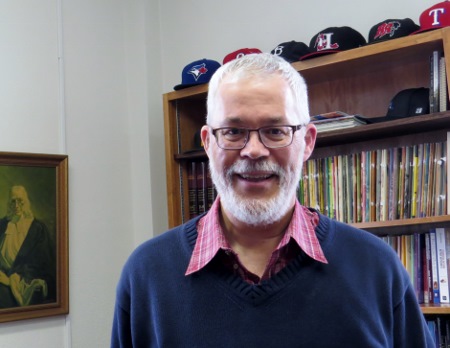 Stamm describes the decision to teach “Sports and Spirituality” as a logical next step, and he had no trouble gaining faculty approval. But it took him a while to feel comfortable about going forward.

“The tough sell was me,” he said, adding that he was determined that the course not be a lark, but a rigorous scholarly reflection.

Stamm notes that humans are often at their “imaginative best” when playing, and he sees play as a gift of God.

“You can make the argument that organized sport is the fulfillment of play in excellence or the beginning of the descent of play into corruption,” he said. “I think it can be both things and historically it has been both things. The reflection comes at that nexus.”

The course deals with scandals that have hit professional and college sports (including SMU’s sanctions by the NCAA) and the challenges female and gay athletes have faced. The race issue in sports is another topic, as is “Sportianity,” for which Stamm assigned the book Onward Christian Athletes: Turning Ballparks into Pulpits and Players into Preachers by Tom Krattenmaker.

There’s also time devoted to exploring, from a theological standpoint, the joy that can come from playing or watching sports. The required reading includes Dan Barry’s book Bottom of the 33rd: Hope, Redemption and Baseball’s Longest Game, which Stamm notes extended into the wee hours of Easter Sunday, 1981.

Deena Hamilton, a third-year Master of Divinity student, said she could tell from the first weeks that the course would be one of her all-time favorites at Perkins. It has deepened her understanding of the influence of sports on American culture, and she believes it will have a career benefit for her.

“I’m very interested in starting sports ministry programs – not just at the local church level, but maybe at the district level where churches work together to build community through sports to reach out to people who don’t go to church,” Hamilton said.

Stamm said he too has been learning a lot in the course, and has been keeping a journal as it goes along.

Having led a baseball chapel service, written a Baseball Berakah and now conceived of and begun to teach “Sports and Spirituality,” he can imagine yet another step.

“All the pieces are there that this could become a book.”