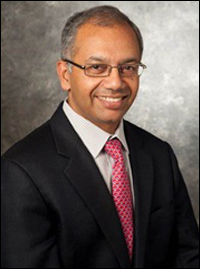 
Center Director, Dr. Suku Nair is a University Distinguished Professor in the Computer Science and Engineering department at the Lyle School of Engineering at the Southern Methodist University in Dallas. His research interests include Software Defined Networks, Virtualization Technologies, and Cyber Security. He is the founding director of the AT&T Center for Virtualization. He is also the founder of the Cyber Security program at SMU, which currently enjoys the NSA/DHS Center of Excellence in Information Assurance Education Cyber Defense designation. He has published extensively in the area of High Assurance Computing and Networking. His research has been supported through funds from National Science Foundation (NSF), National Security Agency (NSA), National Institute for Standards and Technology (NIST), Office of Naval Research (ONR), and various industry including Lockheed Martin, Alcatel, Raytheon, IBM, and AT&T. He has been a consultant to various IT, Telecom and Cyber Security Companies. Some of his recent awards include the SMU Ford Research Fellowship, IBM faculty award, Distinguished University Citizen award, and the University Distinguished Professorship. He received his M.S. and Ph.D. in Electrical and Computer Engineering from the University of Illinois at Urbana in 1988 and 1990, respectively.