Note to editors: a high-resolution photograph of Mary White is available here.

DALLAS (SMU) – Perkins School of Theology is honored to announce Mary White as the recipient of the 2020 Woodrow B. Seals Laity Award. She will be recognized at an award ceremony on Thursday, March 26, 2020, 5:00 p.m., during the opening worship service in Perkins Chapel (6001 Bishop Blvd, Dallas, Texas, 72505) for the three-day Perkins Summit for Faith and Learning. 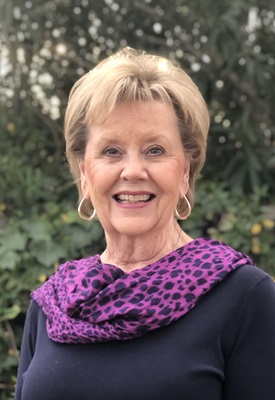 The Woodrow B. Seals Laity Award is presented annually to a layperson in the United States who embodies the Christian faith and commitment of service to Christ in the church, community and world as exemplified by Judge Woodrow B. Seals, a distinguished layperson whose interest and energy were instrumental in establishing the Perkins Summit for Faith and Learning (formerly the Perkins Theological School for the Laity). Selection for the Seals Award is made by the Perkins Lay Advisory Board.

White is a faithful United Methodist, church leader, volunteer and retired educator. Since joining St. Mark’s United Methodist Church in El Paso, Texas, in 1983, she has served as principal, then director of St. Mark’s School, and continues to support the school as a volunteer. Over the years, White has been active in a wide range of mission efforts, including ten mission trips (seven as team leader) in Eastern Europe, Mexico and the U.S.- Mexico borderlands.

“Mary is a dynamic and powerful force of leadership in St. Mark’s and the El Paso community,” said Russ Nebhut, pastor of St. Mark’s United Methodist. “She has a passion for serving the Lord through helping others.”

White grew up in West Texas and eastern New Mexico, and attended New Mexico State University, where she met her late husband, Carol.  They raised two daughters while Carol White’s military career took the family to Tucson, Anchorage and Prattville, Ala., near Montgomery.  After his retirement in 1981, they settled in El Paso and joined St. Mark’s.

In 1990, Mary White became Director of St. Mark’s School, then a preschool and kindergarten. By the time she retired in 2008, the student body had grown fourfold, new facilities had been added and the curriculum had expanded to include classes through the sixth grade.

White’s long list of accomplishments in mission work includes leading or volunteering for mission trips in Macedonia, Hungary, Bosnia and Poland. She also led mission projects at 3M Rancho Orphanage near El Paso and at the UMCOR Depots at Sager-Brown, La., and Salt Lake City, Utah. In support of her nomination for the Seals Award, letters came from around the U.S. and the world.

“Mary has always been a good organizer and could delegate the work in a practical way,” said Istvan Csernak, a retired minister who served United Methodist Church in Hungary between 1996 and 2016. “Our brothers and sisters were not only grateful for the work that was done but were also enriched by the love and fellowship of our friends in El Paso. Mary is a real faith example for many of us.”

Csernak noted that in recent years White and her husband worked in a small remote village Kisvaszar among the Roma people; she continued the work after Carol’s death in 2014.

White also served as Conference Volunteers in Mission (VIM) Coordinator from 2006 – 2015 and as a member of the board of Houchen Community Center, a national mission under the direction of the UMC’s Women’s Division.

The Perkins Summit for Faith and Learning is supported by the Howard-Holbert Endowment Fund. The fund was established in 1986 in honor of the late Dr. Virgil P. Howard, who was associate director of the Perkins Intern Program and professor of Supervised Ministry, and Dr. John C. Holbert, Professor Emeritus of Homiletics who served as Lois Craddock Perkins Professor of Homiletics at Perkins School of Theology from 1997 until his retirement in 2012.

For more information and to register for the Perkins Summit for Faith and Learning visit the website here.