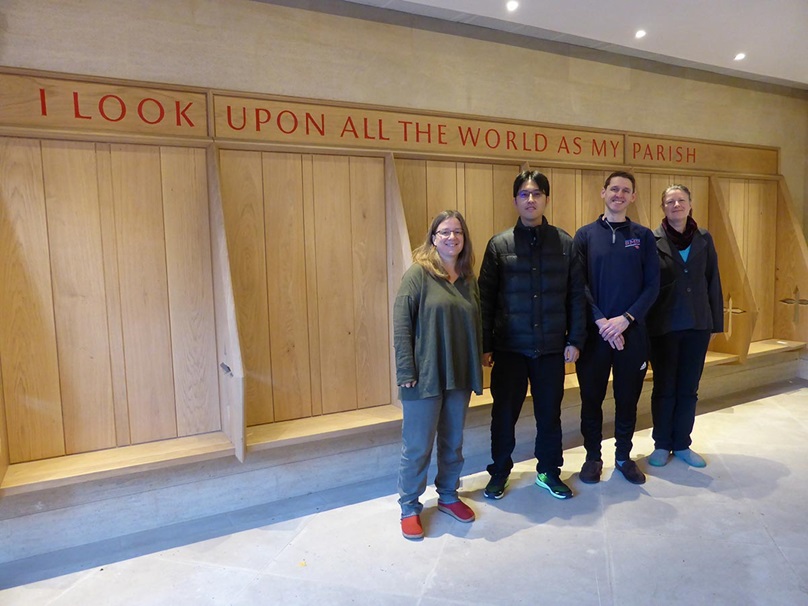 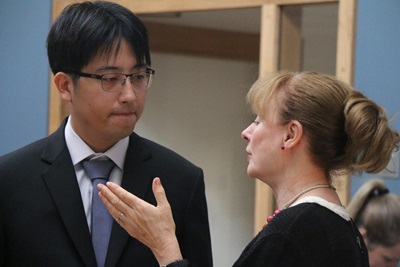 Shuo-en Liang with a fellow student in the Wesley House, Cambridge D.T.M. program.

The partnership offers an exceptional experience for the two Perkins graduates, according to Craig Hill, Dean of Perkins School of Theology.

“At Cambridge, you daily rub shoulders with fellow students and faculty from around the world, and you are exposed to an extraordinary parade of intellectuals and other leaders who pass through the city in any given year,” he said. “To study there is the opportunity of a lifetime.”

As part of the partnership, White and Liang are pursuing a one-year Diploma in Theology for Ministry (DTM), offered through the University of Cambridge’s Faculty of Divinity. 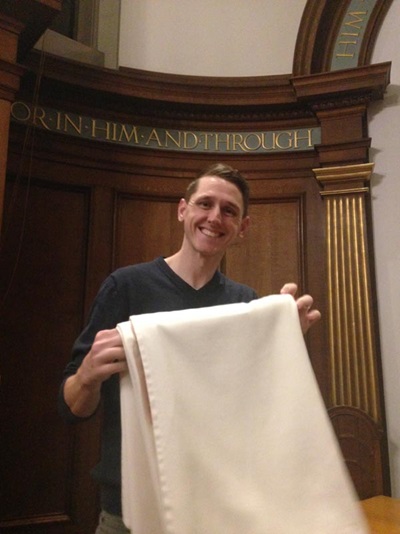 The diploma program offers a “combination of classical theological disciplines taught by world-class academics through the Divinity Faculty of Cambridge University, together with specialist teaching from a confessional perspective delivered by ecumenical partners in Cambridge, in ecumenical classrooms,” according to Dr. Jane Leach, principal of Wesley House. “This is further enriched with teaching and learning from a Methodist perspective on Wesleyan theology and practice in a small, international college seeking to foster genuine encounter across difference in a worshipping community, sharing a common life.”

Both White and Liang will also participate in field placements in local churches. Placements inhospitals and other settings are also available to students as part of the diploma program.

Wesley House was founded in 1921 by philanthropist Michael Gutteridge, who believed that the church needed an educated ministry “engaged with the big scientific, social and ethical questions of the day that can make a contribution to the shaping of society,” according to Wesley House’s website. Residents follow Wesley House’s rule of life, which includes Morning Prayer each weekday and Thursday evening worship, dinner and Eucharist.

Perkins was invited into the partnership as part of Wesley House’s commitment to forming partnerships with centers of excellence in theological education around the world.

“It’s great to have links with schools in North America as part of that mix, and the particular Texas flavor that Perkins brings!” said Leach.

Both Leach and Hill believe the partnership not only enriches the Perkins and Cambridge communities, but has the potential to form lasting, international connections among future leaders.

“We live in an increasingly global world, in which dealing with difference is one of the biggest problems we all face,” said Leach. “Having global encounter as part of the process of formation for Christian leaders and thinkers at Wesley House is one way creatively to deal with this, particularly via the process of personal encounter.”

At the entrance to Wesley House in Cambridge, England, visitors encounter John Wesley’s immortal words: “I look upon all the world as my parish.”

Inside Wesley House, Adam White and Shuo En Liang are experiencing that firsthand. They join an international group of students residing there from Taiwan, Hong Kong, Kenya, Zambia, Fiji, the U.K., South Korea as well as the U.S.

“It’s very rare that you get to have all these representations of the Methodist tradition together,” said White. “Being able to build relationships with people and hear about their different customs, it’s an immense opportunity to learn from others.” 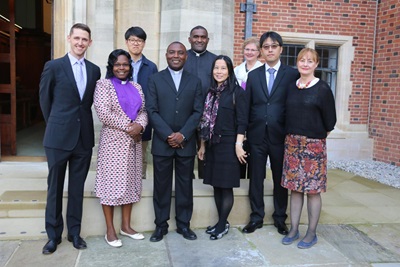 Liang came to Wesley House in part because he hopes that kind of tailored guidance will sharpen his focus for the future Ph.D. work he plans to do. He praises Wesley House’s thoughtful environment.

“We have many chances to see our tutors and ask questions as we see one another in daily worship,” he said. “We can have in-depth conversations at our weekly dinner.”

Liang adds that he’s impressed by the friendliness and collegiality among students and faculty at Wesley House. Already, he’s been called on to serve on a student evaluation committee, part of the selection process for Wesley House’s new Director of Research.

“Our opinions were counted toward the final decision on who will be chosen,” he said. “British Methodism, at least exemplified by Wesley House in Cambridge, really holds up the value of equality.”

White says the opportunity to study in England came as a “God-timing thing” for him personally. Within the past year, both his brother and his mother passed away.

“The opportunity came at a time when I could focus solely on one thing, after a period of sorrow and grief,” he said. “It’s given me the chance to do some soul-tending and personal care, while studying and furthering my education.” He does admit however, that he misses his wife, the Rev. Blair Thompson-White. She will take a sabbatical from her post as senior pastor of Arapaho United Methodist in Dallas to join him at Wesley House for two months later in the term.

While the partnership enriches both the Perkins and Cambridge communities, Dr. Leach believe the participants’ experiences of life at Wesley House have the potential to someday bring Wesley’s vision of the global parish to the broader world, too.

“Belonging in a small community – where encounter across difference is held together by our shared learning and prayer – serves to make this concrete in daily life,” Leach said.

Having studied at Oxford and Cambridge himself, Dean Hill is pleased that members of the Perkins community are enjoying this unique opportunity,

“My years at Oxford and Cambridge Universities were among the richest and most productive of my life,” he said. “The academic environment is, of course, second to none.”

Mary Jacobs, former staff writer for The United Methodist Reporter, is a freelance writer in Dallas.