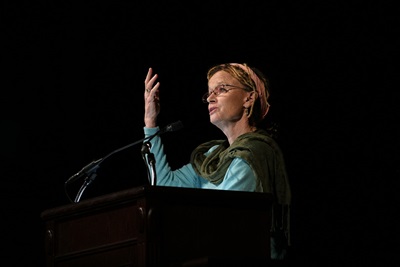 Mercy is the subject of the acclaimed author’s newest book, Hallelujah Anyway. And mercy figured prominently in two lectures she delivered Nov. 13-14 at SMU in connection with the Perkins School of Theology’s 2017 Fall Convocation.

“Mercy, grace, forgiveness, and compassion are synonyms,” she writes. Mercy helps us cope with messes, especially “the great big mess of ourselves – our arrogance, greed, poverty, disease, prejudice.”

As a child, Lamott told a packed house Monday (Nov. 13) at McFarlin Memorial Auditorium, she often felt unmoored and uneasy, a bookish, “skinny, funny-looking kid” with obsessive compulsive disorder, migraines, a father who drank too much, and a home where affection was seldom on display.

She struggled, in vain, to please everyone, to convince herself and those around her that everything was fine.

“I just didn’t want people to see what I was like … I tried to save and fix and rescue everyone else.” But eventually, “it just took me away from me.”

Her salvation, she said, came with the epiphany that “God loves everybody as is. I mean, he has such low standards.”

All it takes to be merciful, she said, is “a heart for someone else’s troubles,” one not darkened by judgmentalism.

She encouraged those in the audience to go to their banks, get $50 worth of $5 bills, and hand them out to people in need – without regard for how the recipients might spend the money. 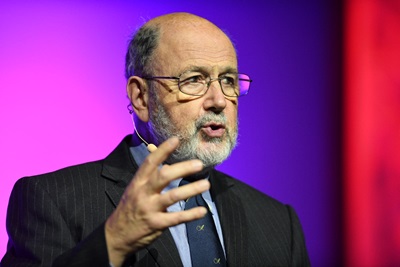 After all, she noted, “Jesus doesn’t ask the blind guy when he heals him what he’ll be looking at for the rest of his life.”

Lamott, a San Francisco native, is the author of seven novels and several bestselling works of nonfiction, including three collections of autobiographical essays on faith. Her writing is often highly personal, dealing honestly and humorously with subjects including alcoholism, single-motherhood, and depression.

She said she borrowed the title Hallelujah Anyway from a song by the gospel and soul artist Candi Staton.

“Hallelujah,” Lamott writes, “that in spite of it all, there is love, there is singing, nature, laughing, mercy.”

The fall convocation, an annual event of Perkins School of Theology, is a continuing education program that includes lectures, workshops, and symposiums, as well as worship services and social gatherings. This year’s theme was “the Power of the Story.”

About 220 people took part in the two-day event at Perkins and Highland Park United Methodist Church. Attendees included students, clergy and laity from throughout Texas and other states.

“Through this year’s Fall Convocation, Perkins brought together three very distinct theological voices and stories in a powerful way,” said Perkins Dean Craig C. Hill. “Through events such as these, Perkins is committed to further strengthening our partnership with the religious community in the Dallas area and beyond.” 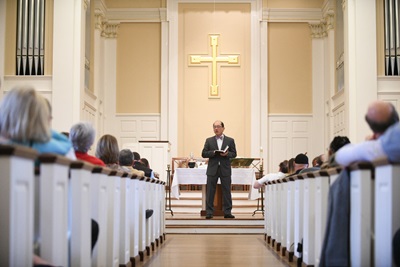 Lamott’s appearance Monday evening at McFarlin, which included a reading from her new book, was free to the university community and the public, courtesy of Perkins. The author also spoke Tuesday to convocation participants, delivering a lecture titled, “On Writing and Faith.”

In addition to Lamott, featured speakers at the convocation were the Rev. Dr. Amos Yong, a professor of theology and mission and the director of the Center for Missiological Research at Fuller Theological Seminary in Pasadena, Calif.; and the Rev. Dr. N.T. Wright, a professor of New Testament and early Christianity at the University of St. Andrews in Fife, Scotland.

Yong spoke about “the soundscape of preaching” -- how the sound of a homily can illuminate its message, much as “tapping a can allows us to discern what might or might not be inside the can.”

Wright, a retired bishop in the Church of England, said that in both his ministry and his academic work, he relies on what he called the three i’s: the inexhaustibility of Scripture, the irreplaceability of family love, and “the indispensability of Jesus and the Holy Spirit.”

Bruce Tomaso is a writer, editor and adjunct professor in the Journalism Division of SMU’s Meadows School of the Arts. He can be reached at brucetomaso@gmail.com.

An Anne Lamott lecture is a delightful blend of homily, writing tutorial, and comic monologue. Her style of humor calls to mind Lily Tomlin; it’s quick and quirky, subtle yet sharp, often self-deprecating and always insightful:

Some samples from her two talks at the Perkins Fall Convocation:

“If you’re an American girl over the age of 12 and you’re not angry, you’ve completely missed the point.”

On her family’s religion:

“We were atheists, so we were better than everybody. … We worshipped The New York Times.

On a memoirist’s honesty:

“If people wanted you to write better stuff about them, they should have behaved better.”

“You should never use the name ‘Brian’ for a main character, because spell-check might change it to ‘Brain’ and you might not catch it.”

On tools of the trade:

“I always carry a pen. I steal pens. I hope you develop this habit.”

“To watch the 10 o’clock news means you’re abreast of all local fires.”

On the face of the Almighty:

“If there is a God, I think he either looks like Isaac Stern or Bette Midler.”

“If you want a good seat in heaven, try to go to more independent bookstores instead of Amazon or the chains.”