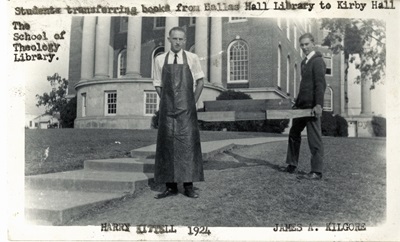 Perkins School of Theology has been part of Southern Methodist University since the university’s founding, growing out of the work of a commission led by Bishop James Atkins of the Methodist Episcopal Church, South to establish a theological school west of the Mississippi River. Dr. E.D. Mouzon, dean of the Theological Department of Southwestern University and later bishop, became the first dean in 1914. With the opening of the university in the following year, the school of theology began its work as the church’s official theological school for the western half of the United States. When ownership of the University was vested in the South Central Jurisdiction of The Methodist Church at the Uniting Conference of 1939, the school of theology became the official theological school of that jurisdiction.

Beginning in 1945, the university received a series of large gifts from Joe. J. Perkins and Lois Craddock Perkins of Wichita Falls, Texas, which made possible the campus relocation and expansion of the school of theology and provided major endowment for its support. The generosity of the Perkins family has continued for three generations from the families of Elizabeth Perkins Prothro and her late husband Charles, and Caren Harvey Prothro and her late husband C. Vincent Prothro, as well as from the family of Kay Yeager and her husband Frank. The establishment of Bridwell Library was made possible through a founding gift from Joseph S. Bridwell of Wichita Falls and his daughter, Margaret Bridwell Bowdle in the late 1940s. The library continues to benefit from the munificence of the Bridwell Foundation.