Those elected to Phi Beta Kappa retain a lifetime distinction. There are no fees past the original induction fee. 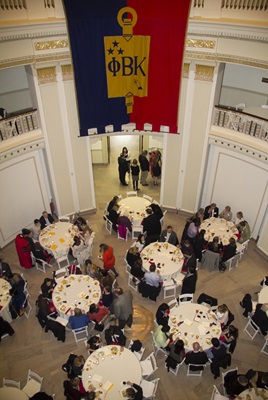 The most distinguished level of membership is election as a junior; very few students achieve this distinction. Most students are elected and inducted in the early spring of their senior year.

Occasionally, graduate students receiving their Ph.D.s are elected to membership if they attended an undergraduate college that did not have a PBK chapter.

"Only about 10 percent of the nation's institutions of higher learning have Phi Beta Kappa chapters.

Only about 10 percent of the arts and sciences graduates of these distinguished institutions are selected for Phi Beta Kappa membership.

The ideal Phi Beta Kappan has demonstrated intellectual integrity, tolerance for other views, and a broad range of academic interests. Each year, about one college senior in a hundred, nationwide, is invited to join Phi Beta Kappa.

Membership in Phi Beta Kappa shows commitment to the liberal arts and sciences, and to freedom of inquiry and expression — and it provides a competitive edge in the marketplace. Potential employers regularly contact the national office of Phi Beta Kappa to confirm the membership of job seekers who have listed Phi Beta Kappa among their credentials."