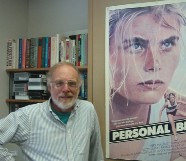 Dick has been a remarkable asset as teacher/scholar in his 40-year career at SMU. After beginning his career at the University of Arizona in 1969, Dick came to SMU in 1973 and became an associate professor teaching courses in criminal justice, crime and delinquency, correctional systems, and deviant behavior. Over the years he also developed specialized courses on social change, law and society, and the sociology of mental disorders.

For more than a decade, Dick served as the chair of the Sociology Department. He had a number of grants from agencies including the National Science Foundation, the North Texas Council of Governments and the Hogg Foundation. Dick’s extensive scholarship has included three books, numerous articles, book chapters and monographs, as well as three dozen conference presentations. He has also had an exceptional teaching career, and consistently received the highest course and teacher ratings in the department. In addition, Dick earned the HOPE award two times, and was given the Outstanding Professor award from Mortar Board.