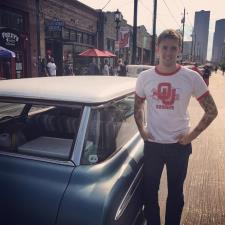 Kevin is a graduate student in History specializing in the history of the American West and Indian Country in the long nineteenth century. His research interests focus on intersections between race, capitalism, and environmental history in the West. Kevin entered the William B. Clements Department of History in the fall of 2017. He earned degrees in History and American Indian Studies from Northeastern State University in Tahlequah, Oklahoma. His graduate training consists of a MA in American Studies at NSU, and an MA in History from Southern Methodist University.