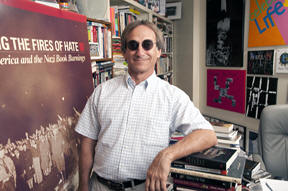 Rick Halperin is Director of the Southern Methodist University Human Rights Education Program http://www.smu.edu/humanrights/ and teaches courses at SMU including: America's Dilemma: The Struggle for Human Rights; America and the Age of Genocide; and America Enraged: From Brown to Watergate, 1954-1974.

He is frequently interviewed on television and radio as well as by print media, and he speaks nationally and internationally on a wide range of human rights issues including genocide and the death penalty

Halperin leads groups of interested persons, including students, faculty, and community members, on human rights educational journeys three times each year to places such as Argentina, Cambodia, Rwanda, South Africa, El Salvador, Bosnia, and numerous Holocaust sites across Europe. Every December he takes a group to death camps and other Holocaust sites in Poland for two weeks. These trips are designed to pay tribute, in part, to those men, women and children who were destroyed in the camps, as well as to honor those who survived the experience. (http://smu.edu/newsinfo/stories/rick-halperin-trip-dec2006.asp) It was, and remains, necessary to remember that the human spirit is capable of enduring and vanquishing the most unimaginable horrors that humanity can produce.