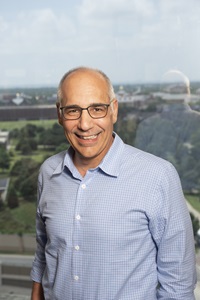 Biographical Information and Areas of Research

Dr. Jouriles served as Chair of the SMU Department of Psychology from 2003-2015 and established the department’s APA-approved doctoral program in clinical psychology. He also served as Director of Graduate Studies and Interim Department Chair (2019-2021) to help guide the department through an important transition period. Presently, Dr. Jouriles is focused on research, and teaching and mentoring students

Dr. Jouriles’ lab conducts research on interpersonal violence and violence prevention, as well as adolescent and young adult relationships. Much of the lab’s current efforts are directed toward understanding the heterogeneity in outcomes among children and adolescents who have experienced or observed violence at close hand. The research is geared toward informing and improving theory and clinical practice to prevent violence and help survivors of violence. A couple of examples of how this research has been applied to informing clinical practice are:

The lab’s current research explores how new technologies, such as virtual reality, can enhance our understanding of how people behave in challenging interpersonal situations, including those that pose a risk of relationship violence. For example, we have been evaluating how virtual simulations can be used as a measurement tool to assess behavior during difficult-to-capture situations involving violence. We have begun to explore behavior during incidents of sexual violence, such as how women respond when being sexually coerced, and “bystander” behavior when an incident of violence is about to occur.

The lab’s research has led to rewarding collaborations with community agencies, such as the Dallas Children’s Advocacy Center and the Dallas Independent School District, as well as colleagues at other universities across the United States and beyond. The lab’s research has been supported by a number of agencies, including the National Institutes of Health and the Centers for Disease Control and Prevention.

Prior to joining SMU in 2003, Dr. Jouriles was Professor and Associate Chair of the Department of Psychology at the University of Houston (UH), where he began his academic career in 1987.

Dr. Jouriles is committed to mentoring and teaching the next generation of clinical scientists, and encouraging people to use empirically-based knowledge for the betterment of society. Toward this end, he teaches research methods and developmental psychopathology at SMU and assists agencies in the Dallas community in helping them provide empirically-supported services to families and children. When he is not working at SMU, you can often find him enjoying time with his family, which now includes Odin, a French Bulldog, sampling BBQ throughout the state of Texas, preparing for his next marathon, or rooting for one of his favorite sports teams. As a native of Northern Ohio, this includes Cleveland-based teams as well as the Indiana Hoosiers, UH Cougars, and SMU Mustangs.