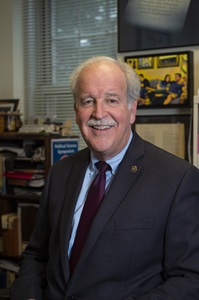 Joseph F. Kobylka earned his B.A., with honors, in government and history at Beloit College (1978) and his Ph.D. in political science from the University of Minnesota (1984). Since joining the SMU faculty in 1983, he has published three books – The Politics of Obscenity (Greenwood, 1990), Public Interest Law: An Annotated Bibliography (Garland, 1992), and The Supreme Court and Legal Change: Abortion and the Death Penalty(University of North Carolina Press, 1992) – and several journal articles and book chapters. His teaching interests touch on constitutional law and politics, judicial decision making, and American Political Thought. His lecture series “Cycles of American Political Thought” was published by the Teaching Company, and he was a major contributor to the PBS series The Supreme Court. He is currently finishing a biography of former Supreme Court Justice Harry A. Blackmun, under contract with University of Virginia Press, and will then turn to a study of recent church-state litigation.