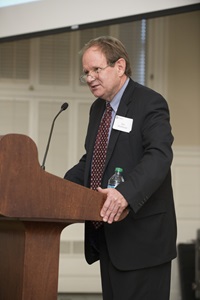 James F. Hollifield is the Ora Nixon Arnold Fellow in International Political Economy, Professor in the Department of Political Science, and Director of the Tower Center at SMU in Dallas, Texas, as well as a member of the New York Council on Foreign Relations and a Global Fellow at the Woodrow Wilson International Center in Washington, DC.

Hollifield has served as an Advisor to various governments in North and South America, Europe, East Asia and the Middle East and Africa, as well as the United Nations, the World Bank, the Inter-American Development Bank (IDB), the OECD, the ILO, the IOM, the EU, and other international organizations.  He currently chairs working groups at the World Bank and the IDB and serves on the International Advisory Board of the National Center for Competence in Research (NCCR for Migration and Mobility) of the Swiss National Science Foundation.   He has been the recipient of grants from private corporations and foundations as well as government agencies, including the German Marshall Fund of the United States, the Social Science Research Council, the Sloan Foundation, the Owens Foundation, the Raytheon Company, and the National Science Foundation.

Hollifield was educated at Wake Forest College (BA with honors in politics and economics), and he studied at Sciences Po Grenoble and Paris (DEA in applied economics) before completing his PhD in political science at Duke University. In addition to SMU he has taught at Brandeis and Auburn, served as a Research Fellow at Harvard’s Center for European Studies and MIT’s Center for International Studies, and was appointed Director of Research at the CNRS and Sciences Po in Paris.  He is a Fellow at the Center for US-Mexican Studies at the University of California at San Diego, at the Institut zur Zukunft der Arbeit (IZA) at the University of Bonn, and the Global Migration Centre at the Graduate Institute of International and Development Studies in Geneva.  During the last academic year (2015-16) he was named as a Public Policy Scholar at the Woodrow Wilson International Center for Scholars in Washington, DC and has continued his work there as a Global Fellow.  In 2016 Hollifield received a Distinguished Scholar Award from the International Studies Association.