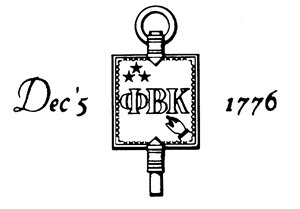 Phi Beta Kappa (ΦBK) is the oldest and most prestigious academic honorary society in the U.S. Above all, the society stands for excellence; superb academic performance is a sine qua non of membership.

Gamma of Texas, SMU’s Phi Beta Kappa chapter, was chartered in the fall of 1949.  The first induction ceremony for Gamma of Texas was held on December 12, 1949, with SMU President Umphrey Lee as the first member inducted.

The Love Of Wisdom Is The Guide Of Life

Our motto is “the love of wisdom is the guide of life.” (That is what the Greek letters Phi Beta Kappa stand for.)  Our society has always held that the academic subjects traditionally called “the liberal arts” are the core of human wisdom.  Specific eligibility requirements for induction to our Phi Beta Kappa chapter are described on our Eligibility page.

Some Phi Beta Kappa members pursue academic careers in the Humanities and Sciences after graduation.  Many members, however, go on to earn professional degrees in the law, medicine, public administration, business, and engineering.  Our members have found that the life of the mind is valuable for its own sake, and that its rigorous pursuit also prepares students for a wise and successful engagement with the world.