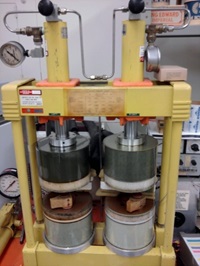 Samples are placed in between the press where the wooden blocks are located in the picture.  Using the divided bar, the speed at which heat/cold travels into the rock is measured and compared to standard samples to calculate an absolute thermal conductivity. 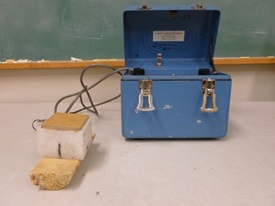 Most often the needle probe would be inserted into the material, however, the tool shown here has an insulating surface glued to one side so that the needle probe will send heat into the rock alone.  The needle probe has a heater wire running the length of the white insulating foam at the location of the black line; the tan half cylinder is a half core rock sample.  Transient temperatures are measured at the center point of the needle as the sample is heated.  Similar to the divided bar, the speed at which heat travels into the rock is measured by this process and is compared to standard samples to calculate an absolute thermal conductivity. 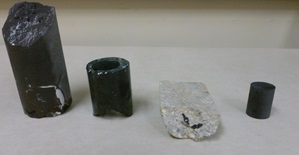 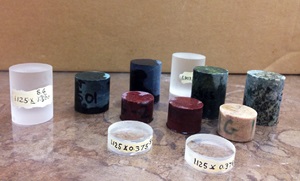