The gift builds on a legacy of forward-thinking alumni and friends who have supported SMU and Dedman College through endowment giving. From the 1920 establishment of the Hyer Endowment in Physics to the 2007 creation of the C. Vin Prothro Biological Sciences Initiative, many generous donors have provided permanent resources for student scholarships, faculty positions, and academic programs and centers in the sciences and humanities. 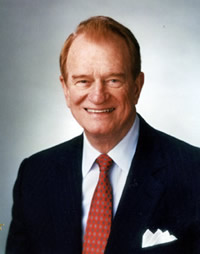 Ambassador Huffington was chair and CEO of Roy M. Huffington, Inc., an independent, international petroleum operations firm based in Houston. His distinguished career included global oil and gas exploration, international business and military and diplomatic service. After serving in the U.S. Navy during World War II, he spent 10 years with Humble Oil and Refining Company, now ExxonMobil. In 1956 he founded Huffco, an oil and gas firm that began exploration in Indonesia in the late 1960s. In 1988 Newsweek listed Huffington as one of 25 Americans “in the forefront of building bridges to the East.” As U.S. Ambassador to Austria from 1990 to 1993, he worked to open business opportunities between the newly accessible Eastern bloc countries and the West.

Among the many honors Huffington received were the Gold Medallion Oil Pioneer Award from the Indonesian government, the Grand Decoration of Honor in Gold for services to the Republic of Austria, the Woodrow Wilson Award for Corporate Citizenship from the Woodrow Wilson International Center for Scholars, the Henry Laurence Gantt Medal from the American Society of Mechanical Engineers and the Gold Medal for Distinguished Achievement from the American Petroleum Institute. He also was chairman emeritus of both the international Asia Society in New York City and the Salzburg Global Seminar in Salzburg, Austria.

A Legacy of Leadership

Ambassador Huffington’s association with SMU began as an undergraduate. He earned a B.S. degree in geology from SMU in 1938 and then earned both M.A. and Ph.D. degrees in geology from Harvard University. His late wife, Phyllis Gough Huffington, earned her B.B.A. degree from SMU in 1943. Huffington received distinguished alumni awards from SMU and the Harvard Business School. He also received an honorary Doctor of Humane Letters degree from SMU in 1990. A member of the SMU Board of Trustees from 1980 to 1987, Huffington was named a trustee emeritus in 1991. In 1996 he and his wife received the Mustang Award for longtime service and philanthropy to the University. The Huffingtons’ numerous gifts to SMU included the following endowed funds.