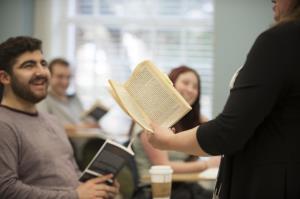 In her first book, Professor Melissa Dowling examined the ways in which Romans responded to the end of democratic Republican government and the rise of Roman Imperial society. The transition resulted in a new ideal of clemency to balance the cruel abuses of power in the Roman empire. Clemency and Cruelty in the Roman World explores the spread of clementia as a popular virtue, ultimately influencing early Christian ideals of mercy.
Dowling’s current book, The Cult of Isis and the Suffering Heroine: Heliodorus’ Aithiopika, explores the ways in which the Egyptian worship of Isis was absorbed and transformed in the Roman empire. She focuses on the worshipper’s experience in temples and shrines in Greece, Italy and Egypt, and on religious symbology. The works of Plutarch and Heliodorus in particular reveal the initiate’s understanding of the moral and philosophical framework of the cult.

Dowling’s third book project, The End of Time: Eternity and Immortality in Roman Culture, examines the connection between ancient ideas of immortality and changing Roman conceptions of time and temporality. In particular, she is investigating the contributions of the Egyptian cult of Isis to Roman ideas of the afterlife, an important predecessor to Christian beliefs in heaven and hell. The End of Time is an interdisciplinary study of intellectual and cultural developments in the Roman empire between the first century B.C. and the third century A.D. She examines the politicization of time and the calendar, the increasingly sophisticated political manipulation of time in the ancient world, and the creation of a concept of time as a force or deity. Her study begins with Julius Caesar, the Julian calendar, and the creation of a political ideology of time at the end of the Roman Republic. Dowling concludes her study by analyzing the transformation of Egyptian and Roman ideals of eternal time that resulted in the creation of apocalyptic ideas of time in early Christian thought.