Get to know the history of residential living and life on the Hilltop.

Our Mustang history keeps unfolding and we are far from done. SMU's first president, Dr. Hyer was asked, after the building of Dallas Hall - the first building on SMU's campus, "When will the university be completed, Dr. Hyer?" "After the city of Dallas is completed," he replied. Our story continues, but we have summarized major developments in residential life at SMU. 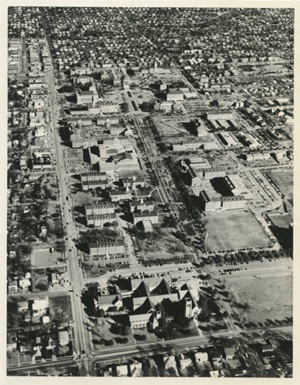 Southern Methodist University (SMU) has supported student residential life since its founding in 1911. This commitment was manifested at the opening of the Women’s Building (later Atkins Hall), which was constructed in 1912 as a companion building to the iconic Dallas Hall when SMU opened. Atkins Hall was the scene of both women’s and men’s on-campus living experience for many years before being retired as a residence hall in 1959. Following Atkins Hall’s retirement, the building was converted to an academic and administrative facility, Clements Hall, where students continue to take classes today.

Since those early years, 18 permanent residence halls were constructed between 1926 and 1964, housing around 2,500 students. How these halls are used has evolved over the years. From 1920 to 2013, SMU employed a traditional on-campus housing operation that in more recent years catered primarily to first-year students. Over time, residential buildings were repurposed to serve academic functions. By the time the idea of the Residential Commons entered the scene, SMU could house a little over 1,500 students in traditional residence halls or within a limited number of themed communities, including Honors, Engineering, Fine Arts, and Service housing.

Around 2006, senior campus leaders, including President R. Gerald Turner, Vice President for Student Affairs Lori White, and Provost Paul Ludden, sought solutions to a variety of campus issues that, if addressed, could increase retention rates and improve the overall student experience on the Hilltop. Various task force recommendations were put forward to address substance abuse, retention, honors programming, on-campus housing, the first-year experience, the development of a sense of community, and the desire to integrate academic and social elements of the University.

In the lead-up to the decision to implement the Residential Commons system, University leaders collectively came to the agreement that a drastic change in the residential experience at SMU could have a significant effect on improving campus life. In writing about the rationale for the shift to the RC system, SMU student Jamie Hinz said, “...on the most general level, . . . a culture shift is needed at this point in the University’s history. Such a culture shift would involve two separate but closely related dimensions: social and academic. Changes in either dimension will affect the other.”

SMU’s integrated campus housing follows a residential college model and is a distinctive feature of the University. SMU designed the Residential Commons for students to integrate their academic, residential, and social experience and, subsequently, cultivate a sense of belonging to the University. While the Residential Commons are a housing system at their core, they truly embrace the SMU experience since their founding in 2014.

To accomplish the transformation to the new Residential Commons system, a number of significant physical and organizational changes were implemented. First, an unprecedented financial investment was made by the University following substantial contributions by SMU donors, leading to the construction of 5 new residential buildings and the renovation of 8 existing residential buildings to create 11 new communities. Additionally, a new two-year live-on requirement was put in place to underscore the importance of the residential experience at SMU. Finally, a Faculty-in-Residence program was created to connect faculty at SMU directly with residential students by creating avenues for closer interaction and community-building.

We know that the people make the place. Often, former residents of the Residential Commons are interested in contacting their former Faculty-in-Residence they lived with during their time on the Hilltop. We maintain this historical service record to facilitate the maintenance of these life-long connections.

We know that the people make the place. Often, former residents of the Residential Commons are interested in contacting their former Residential Community Director they lived with during their time on the Hilltop. We maintain this historical service record to facilitate the maintenance of these life-long connections.