Special Tribute: Click HERE to see the halftime ceremony which celebrated the retirement of Peruna VIII and the inauguration of Peruna IX!!

During Prohibition there was a popular alcohol-laced over the counter medicine called ‘Peruna Tonic’. The mascot was quickly given the name ‘Peruna’ reflecting this ‘medicine’ (Did someone say ‘spirit’?) There is no longer a double entendre when one hears the name ‘Peruna’, but the lively black stallion has always been a representation of true SMU spirit. 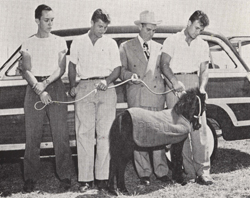 Following the death of Peruna I, W.E. Culwell (owner of Culwell and Sons) began a tradition of supplying SMU’s mascot. According to Culwell’s son, C.W. ‘Cully’ Culwell (’54), “He (Dad) would go to every game and serve barbecue to the players after the game; he really loved the school….Dad donated a Shetland pony because they have a greater longevity than a quarter-horse.” (Shetlands will normally live 25 years or more, while a quarter horse will only live 15-18 years.) His generosity continued until his death in 1964 and has been continued by the Culwell family. Until 1993, the mascot was stabled on the 500-acre Culwell Ranch in Grapevine. Since then, the stabling location is kept a secret. To date, eight mascots have represented SMU…6 stallions and 2 mares, although hard-core types prefer all-black stallions because of their alleged vitality and spirit. When Cully Culwell was having difficulty locating a black stallion to replace Peruna VI, he shared that “stallions are hard to obtain now because most young male horses are castrated to make them tamer….a stallion which is more aggressive, better represents the spirit of the SMU Mustangs.”

For over sixty years, Peruna’s job was to run across the field after every touchdown. In 1996 at the Cotton Bowl in SMU’s first WAC game vs. Tulsa, the WAC Commissioner told SMU athletic officials that it was not legal and to stop before penalties were given. (Due to incidents in other conferences, the NCAA reviewed guidelines about mascot safety and decided mascots should not be allowed on the field during the time of play.) Since that time, Peruna leads the team onto the field and runs between quarters. All Perunas (past and present) have been hell to control and stories of antics and misbehavior are legendary. He kicks, he trips up his handlers, and is generally uncooperative. When he takes off with his two handlers, there is often a question as to who’s running who. 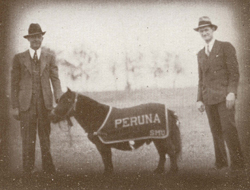 The first mascot was a 28” high, 150-pound pony donated by T.E. Jones of Arlington Downs. The feisty miniature black stallion made his first appearance at a pep rally, November 4, 1932. He was promptly named ‘Peruna’ after a popular patent medicine (18 percent alcohol). Legend has it that the medicine was ‘full of kick’, as was SMU's first mascot. He was kept on campus under the care of an organization called “The Saddle Burrs”. Soon an organization called “The Saddle Burrs” was formed to supervise his care as he was kept on campus.

A week before Peruna I’s death, he traveled to New York for the Fordham game where a city cab was his mode of travel. At the time, Bob Goodrich (who later became a Methodist Bishop) was the Band Director and took his younger brother, Wilson, on the trip as a ‘Shovel Boy’ for Peruna!

In 1934 on a Tuesday evening, Peruna I was hit on Mockingbird by a speeding motorist and killed. The next day, the student body president (Finis Crutchfield ’37), along with the leader of the Mustang Band (Robert Goodrich ’35), led the procession from the flagpole to the burial site near Ownby Stadium. For the processional, the Mustang Band played ‘Peruna’ (She’ll Be Coming Around the Mountain) as a dirge. In 1937, a statue (currently on Peruna Plaza at Ford Stadium) was sculpted by Michael G. Owen Jr. (’37) and placed at the burial site of Peruna I. 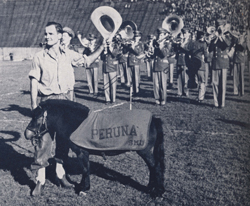 Peruna II, a black Shelton pony raised at the Culwell Ranch, marked the beginning of the Culwell connection. Peruna II was the first of two mares to serve as mascot. The mare had a white diamond on her forehead and, therefore, it was dyed black to protect the image. She died of blood poisoning after being kicked and injured by another horse. 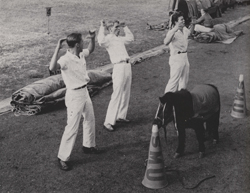 During Peruna III's reign, the Culwells purchased Peruna his own special red and blue trailer. It served to transport all subsequent Peruna's until 2002 when a new trailer was purchased. 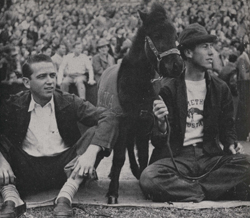 Peruna IV, the second mare, led the Mustangs to two consecutive Southwest Conference championships. She died of a jaw infection in the summer of 1949. Gene Gaddy ('50) recalls that, because of his role on the Student Council, he was called back from summer break to serve as a pallbearer for Peruna IV. She was buried on the then practice field (now Wescott Field) draped in a blanket. 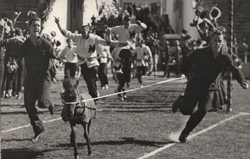 During the fifteen-year reign of Peruna V, he gained a reputation of arrogance...his lively prancing, rearing and biting were good examples of SMU's fighting spirit. Toward the end of his reign he kicked out the side of his stall (which happened to be the baggage car) on his way to Lubbock. In Chicago for the 1953 Notre Dame game, Peruna V was put up at the posh Stevens Hotel, had elevator privileges, and drank from the washbasin. Alys and George A. Richards, a former Peruna Handler, recalled a story from 1959 when they were hauling Peruna to a University of Texas game. As they drove, the radio programming was interrupted to inform the audience that Peruna had been"horse napped"; by UT students who would display him at the game the next day. They continued to Austin and arrived at the game with Peruna in tow. The UT student body was surprised to see the real Peruna parade in because the wrong stolen horse was there also...minus its tail and mane. 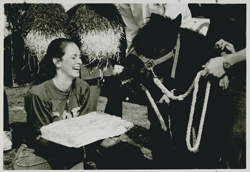 Peruna VI started his tenure as an 18-month old on October 2, 1965 at the Cotton Bowl when SMU played Purdue. He served for 21 years until a liver ailment forced him out of action. He had the longest tenure, to date, of any mascot. After death, Peruna VI was buried at Ownby Stadium at a secret night service. When Ownby Stadium was demolished, Peruna VI's remains were the only ones recovered. His ashes now rest under the statue at Peruna Plaza at the stadium's south end. 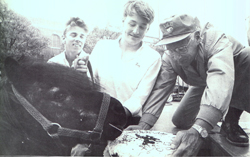 Peruna VII arrived at the Culwell ranch a year before his reign began. At the beginning of his reign, Cully Culwell said,"We would have like to have run Peruna VII a year earlier, but he proved to be a tough horse to break...He's still a little skittish at times, but he's full of fight!" Peruna VII was to make his debut during the Homecoming game, but due to Peruna VI's illness, his first showing came at the SMU/TCU game on September 27. 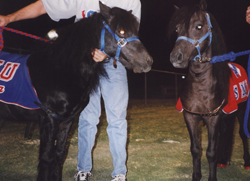 During the summer of 1986, Peruna VII broke his leg when he caught his hoof under the gate of the stall. "Under normal circumstances, a horse would be put down," said Cully Cullwell. The healing process was expensive but enabled him to continue his service to the university. The two years of rest through the Death Penalty, assisted in his healing, though he was retired early due to increasingly more frequent shots to reduce swelling before games. His retirement found him living on a ranch until his liver began to fail in May of 2002 and he was euthanized. His ashes are currently in a coffin awaiting a resting spot in Heritage Hall when it is funded. 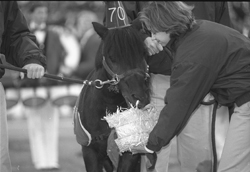 Peruna VIII 'exchanged reins' at the Spirit and Traditions Pep Rally at the beginning of the 1997 school year. Peruna VIII is a spirited lean black stallion that immediately made his mark by dragging and tripping several of the Peruna Handlers. He began his service on the field at the Cotton Bowl and was the first mascot to initiate the playing field at the new Gerald J. Ford Stadium. After a long road trip to Washington, D.C., Peruna VIII led The Mustang Band in President George Bush's 2001 Inauguration Parade. Peruna VIII's infectious, untamed spirit is demonstrated before every game and as stamps and whinnies as The Mustang Band forms a tunnel and he waits impatiently to lead the players on to the field. He also spent Christmas Eve 2009 in Hawaii where he led the Mustangs onto the field for the Hawaii Bowl where the Mustangs took on Nevada to win their first bowl appearance in 25 years (45 -10). He retired at the age of 17 after a 14-year reign. 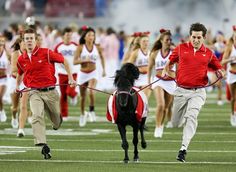 Peruna IX "exchanged reins" with Peruna VIII during the halftime show at the SMU vs. Central Florida football game at SMU's Ford Stadium on Oct. 15, 2011. Peruna IX was groomed for the job since his selection as a colt. The rough-and-tumble stallion attended summer band practices to become adjusted to game noise and has been clocked galloping across the football field at a record pace. His first season was a success as he traveled to Birmingham to see the defeat of the Pitt Panthers in 2012 BBVA Compass Bowl (28-6). Sources say his feisty character and strong personality make him well-suited for the strenuous job. He runs free at a secret location when not representing the Mustangs.

The SMU Peruna handlers are a select group of students with a great deal of SMU Spirit that take care of a unbridled mascot and lead him across the field during football games! PONY UP!!!

For additional information or if you have questions regarding Peruna Handlers, please contact Jimmy Ramey at jramey@smu.edu.

Human Peruna is the costumed mascot that represents Southern Methodist University and SMUs Athletic Department. The character is an extension of Peruna to be enjoyed by fans -- especially children -- at all SMU athletic contests. Human Peruna features traditional collegiate gear as part of his regular uniforms, but he also don team uniforms for football  and men's and women's basketball games.

Human Peruna is an accessory to our longtime beloved live mascot, Peruna.  Mascots perform at football and basketball games. They are also required to attend community events. There are 2-3 mascots as a part of a program during each season.

During summer break Human Peruna is not available to attend as many events as normal. Thank you for understanding. 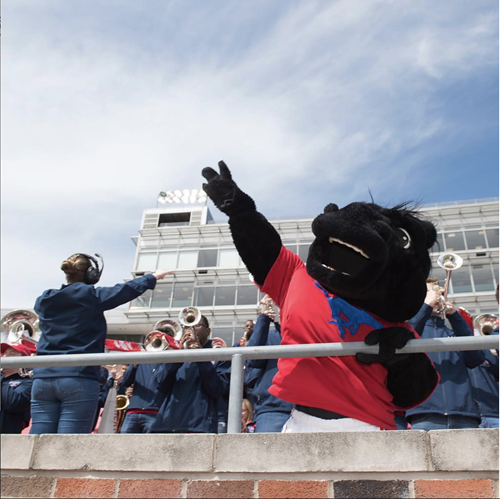