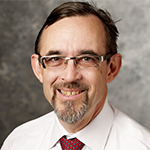 SMU Associate Dean for General Education Peter Moore became Associate Provost for Curricular Innovation and Policy at Southern Methodist University in October 2016. In this position he will work to promote innovations in curricular structure and content. Dr. Moore brings to this position a wealth of familiarity with SMU’s core curriculum. As head of the Office of General Education, since 2014 he has worked with the University Curriculum Committee and the Faculty Senate’s Academic Policies Committee, as well as faculty across the University, to develop the revised curriculum known as UC 2016 based on data and experience gained from the University Curriculum of 2010.  Dr. Moore also chairs the Educational Programs Committee, which advises the Provost on matters involving curricular change, new program initiation, and program discontinuance.

Moore joined the Department of Mathematics in SMU’s Dedman College of Humanities and Sciences in August 2000, after serving 11 years as a faculty member at Tulane University in New Orleans. His teaching interests include calculus, differential equations, numerical analysis and modeling.

He served as department chair from August 2005 to May 2009, and twice as dean ad interim of the College: from June 2009 to July 2010 and from June to August 2014. His SMU service also includes membership on the Provost’s Committee on Tenure and Promotion and the Steering Committee for Project SMU: Operational Excellence for the Second Century (OE2C).

As a researcher, Moore is an expert in the computational solution of reaction-diffusion equations that occur in a variety of scientific and engineering applications. His projects have been funded by the National Science Foundation and the U.S. Department of Energy, among others.

Moore received the “M” Award, SMU’s highest honor for service to the University, in 2012. In 2010, during his first appointment as Dedman College acting dean, he became the first administrator to be elected to membership in Phi Beta Kappa by the SMU (Gamma of Texas) chapter. His professional service includes an appointment to the editorial board of Applied Numerical Mathematics from January 2004 to December 2009.