Nominations Being Accepted for 2019 Woodrow B. Seals Laity Award 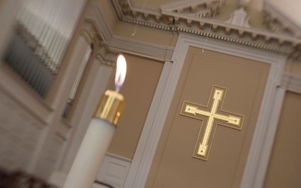 DALLAS (SMU) – Nominations for the 2019 Perkins School of Theology Woodrow B. Seals Laity Award are now being accepted through December 1, 2018.

The annual award is presented to a layperson in the United States who exemplifies an exceptional commitment of service to Christ through faith and action in the church, community and world. Awarded first in 1993, the award has been presented to more than 45 distinguished laypersons throughout the years.

The Seals Award receives support from the Howard-Holbert Endowment Fund, and honors Judge Woodrow B. Seals (1917-1990), a distinguished layperson whose interest and energy were instrumental in establishing the Perkins Theological School for the Laity.

The 2018 Woodrow B. Seals Laity Award recipients were Dr. Lydia Bean is the founder and Executive Director of Faith in Texas; Dr. Kathryn S. Stream, retired Senior Vice President of the Texas Medical Center collaboration in Houston and Dr. Beverly E. White, a hospitalist at Baylor University Medical Center in Dallas.  In 2016, the recipient was Dr. Mauro Ferrari, the Executive Vice President of Houston Methodist and the President and CEO of the Houston Methodist Research Institute. (No award was given in 2017.) Previous recipients include Kay Prothro Yeager (2015), Bliss Dodd (2014), Linda Marr, Dr. Kenneth and Lila Foree (2013), William E. "Bill" Turner (2012) and Jackie A. Strange (2011). See a complete list of former recipients here.

Presentation of the 2019 Seals Laity Award will take place during the Perkins Theological School for the Laity next spring.

The sponsor should compile all nomination materials and mail or email as one package. Selection is made by a committee of the Perkins Lay Advisory Board. Nominations remain active for three years including the year of submission.

Nominations should be submitted by December 1, 2018 to:

Or by email to: theoexternalprograms@smu.edu.

View Additional Information about the Woodrow B. Seals Laity Award.