DALLAS (SMU) – Bridwell Library at Perkins School of Theology, Southern Methodist University announces an exhibition highlighting forty-five Bibles from the collection of Thomas J. Harrison (1885-1963). This display will take place from February 1 through May 4, 2018 and will be located in The Elizabeth Perkins Prothro Galleries at Bridwell Library. 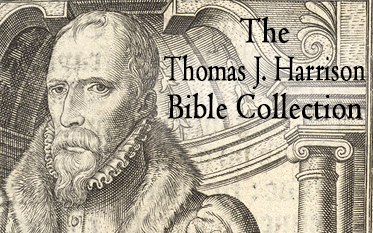 Born in Fayetteville, Arkansas, Harrison moved with his family to Pryor, Oklahoma, as a young boy and resided there for the remainder of his life. Active in the civic and cultural affairs of Pryor, he served as mayor as well as city treasurer. His contributions also included supporting the establishment and development of the city's public library.

Harrison began collecting Bibles in the 1940s, eventually acquiring over three hundred works. Particularly engaged with the history of the English Bible, he gathered first editions and later printings documenting the sequence of texts culminating in the 1611 King James Version and the English-language biblical tradition that followed in the United Kingdom and the United States. Complementing these interests, he also acquired rare Bibles in biblical, Native American, and world vernacular languages produced between the thirteenth and twentieth centuries.

Harrison holdings include a remarkable seventeenth-century Chinese Torah scroll,medieval manuscripts, incunabula, early editions in biblical languages, polyglot and diglot Bibles, European and world vernacular translations, English and American imprints, and modern fine press editions. These Bibles are presented regularly to visitors and classes, engaging students and scholars interested in the dissemination of biblical texts and the continuing impact of the Bible throughout the centuries.

Information about public parking at SMU (including maps of the SMU campus): www.smu.edu/maps.