Bridwell Library Exhibition: Martin Luther in the Age of Print 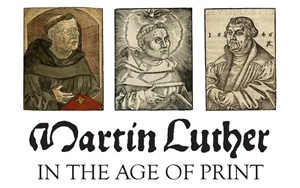 Commemorating the five hundredth anniversary of the announcement by Martin Luther (1483-1546) of his Ninety-five Theses against indulgences, and the beginning of the Reformation, this exhibition serves as an introduction to the reformer and his printed works.  After attending university in Erfurt, Germany, Luther eventually focused on theological study, entered the Augustinian order in 1505, and was ordained two years later. In October 1512 he received his doctorate in theology and joined the theology faculty at the University of Wittenberg, a position he would retain throughout his career.  The dissemination of his critique regarding indulgences began an extraordinary publishing career that reflected his multiple roles as a theologian, preacher, teacher, and translator. The various genres represented in this exhibition include polemics and treatises, sermons and commentaries, Bible translations, and catechisms.

In addition to his immense impact on Western Christianity in the early modern period, Luther also greatly influenced the world of print in sixteenth-century Europe.  A remarkably prolific author, he published more than twenty-five hundred editions of his German works, not including the various editions of his German Bible. Often first appearing in Wittenberg, his books were frequently reprinted in Leipzig, Erfurt, Augsburg, Nuremberg, and Strasbourg. These established printing centers provided additional distribution of his works while Latin translations further increased his readership.

Exploring different printed contexts for Luther’s works, this exhibition includes Bibles and indulgences produced prior to Luther’s own publications as well as pre-seventeenth century Catholic responses to Luther and the early Reformation during his lifetime and after his death. This combination of Luther’s publications and those of his adversaries provides insight into the beginnings of the Protestant Reformation and the divisiveness engendered by this quest for religious reform as witnessed in the age of print.