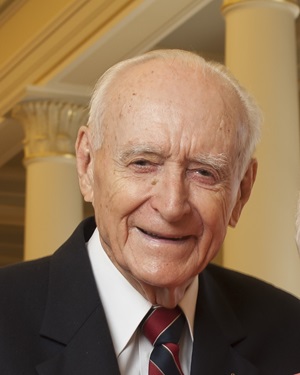 A native of San Antonio, Bishop Hardt was born July 14, 1921 to Rev. Wesley and Ida Wilson Hardt. He earned the Bachelor of Arts degree from SMU in 1942 and began his ministerial career as a supply pastor that same year. In 1943, he succeeded his father as pastor of the Methodist congregation in Malakoff, Texas. He was ordained as an Elder in 1944 and received the Bachelor of Divinity degree from SMU’s School of Theology in 1946. He pastored churches in the Texas Annual Conference and served as District Superintendent of the Houston East District until his election as Bishop in 1980. He served the Oklahoma episcopal area – including the Oklahoma Annual Conference and the Oklahoma Indian Missionary Conference – in that capacity until 1988, whereupon he became the Perkins Bishop-in-Residence until retiring in 2000 and became Bishop-in-Residence Emeritus.

“With the death of Bishop John Wesley Hardt, Perkins School of Theology has lost a dear colleague, pastor, mentor and friend,” said Dr. Craig C. Hill, dean of Perkins School of Theology. “His interest in Perkins was evident from the beginning of my deanship in July 2016, when he made a point of visiting me in my office, and we spoke multiple times over the past year. I am very grateful to have and those opportunities, which were always both delightful and informative, and only wish I could have more.

“Bishop Hardt is irreplaceable, but his contributions will live on at Perkins and throughout the denomination. He will be greatly missed.”

In addition to serving on the SMU Board of Trustees from 1980 to 1988, Bishop Hardt also received the Perkins Distinguished Alumnus Award in 2008. The Bishop John Wesley Hardt Award – established by the Perkins Student Association in 1998 – is named in his honor and annually is presented to a student in good academic standing who is entering his or her last year of work at Perkins.

Bishop Hardt and his wife, Martha Carson Hardt, were married in 1943. They traveled around the world visiting Methodist mission work in Asia, Southeast Asia, Africa, Europe, and South America and were delegates to World Methodist Conferences in Denver, Dublin, Honolulu, Nairobi and Singapore. He was also a delegate to all General Conferences of The United Methodist Church from 1960 to 1980.

"Bishop Hardt epitomized what it means to be a servant-leader," SMU President R. Gerald Turner said. "The value of his contributions to SMU are immeasurable. His legacy will live on, but we will miss his physical presence, which has been such a significant part of SMU's history for more than 75 years. I will personally miss the times we spent together and our friendship."

Said SMU alumnus and Trustee Richard Ware: "Bishop Hardt was the leader of the three Bishops who oversaw all the changes of SMU governance, athletics, community relations and reputation during the trying times of 1987 and 1988 before Kenneth Pye became SMU's President. The Bishop's warm personality, strong moral compass and dedication to the University inspired all, especially the Interim Executive Committee and the then-newly reconstituted Board of Trustees. He was such a true friend to so many of us. SMU today owes much to our Bishop who played tennis, encouraged all and brought us together."

Bishop Hardt authored four books: a book of sermons titled Not the Ashes, But the Fire, published in 1977; Lakeview, A Story of Inspiring Unity, published in 1992; Cecil Peeples, Giant of the 20th Century; and Forward in Faith, a History of Marvin United Church, Tyler, TX, published in 1999.

“John Wesley Hardt was the consummate pastor,” said Dr. William B. Lawrence, Professor of American Church History at Perkins who also served as the school’s dean from 2002-16. “He was entirely devoted to the well-being of others. He was legendary for his extraordinary capacity to remember persons' names and connections with their churches and communities, all of which demonstrated how deeply he was focused on other people.”