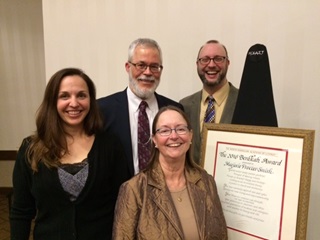 The North American Academy of Liturgy awarded Marjorie Procter-Smith, the Le Van Professor Emerita of Preaching and Worship at Perkins School of Theology, one of the organization’s top honors during its annual meeting on Saturday, Jan. 9.

Procter-Smith, who taught at Perkins from 1983 until her retirement in 2011, received the Berakah Award during NAAL’s annual meeting in Houston. The award, given to liturgists or persons of an allied vocation in recognition of distinguished contribution to the professional work of liturgy, has been given each year since 1976.


NAAL is an ecumenical and inter-religious association of liturgical scholars who collaborate in research concerning public worship. NAAL meets annually in early January in cities throughout the United States and Canada. The academy’s more than twenty seminars provide the locus of our work and the heart of our meetings.

The Academy has a dual purpose:
• to promote liturgical scholarship among its members through opportunities for exchange of ideas; and
• to extend the benefits of this scholarship to the worshiping communities to which its members belong.

While at Perkins, Procter-Smith’s teaching specialties included the history, theology and practice of Christian worship, and women’s studies. Her research interests encompassed Christian feminist liturgy and ritual, performance theory and ritual studies. Additionally, Procter-Smith was instrumental in the 1999 renovation of Perkins Chapel and served as Associate Dean for Academic Affairs from fall 2000 to spring 2005.