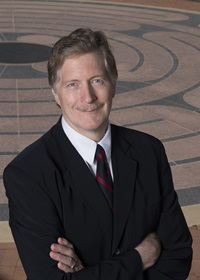 Dr. Hill came to Perkins in July, 2016, from Duke University Divinity School in Durham, North Carolina, where he was Professor of Theological Pedagogy and the founding director of two degree programs. Prior to that, he was Professor of New Testament at Wesley Theological Seminary, where he also held a variety of administrative posts, including directing the Wesley Ministry Network project, which filmed some eighty scholars from eleven countries and produced educational DVDs used for adult instruction in nearly two dozen countries.

Craig Hill is a native of Springfield, Illinois, and is an ordained elder in the United Methodist Church. He served for a decade in various pastoral appointments, including the chaplaincy of Christ Church, John Wesley’s undergraduate Oxford college. He is a graduate of Illinois Wesleyan University, Garrett-Evangelical Theological Seminary, and the University of Oxford, where he completed his doctorate in New Testament History in 1989. Hill also served as a Fellow of Yale University and a Visiting Fellow of the University of Cambridge. His publications include Hellenists and Hebrews: Reappraising Division within the Earliest Church, In God’s Time: The Bible and the Future, the Romans portion of The Oxford Bible Commentary, and Servant of All: Status, Ambition, and the Way of Jesus (autumn 2016). He is also the President of the Board of Directors of the Wesley Works Project, which was initiated more than thirty years ago by Albert Outler to publish the definitive, scholarly edition of John Wesley’s works.

Craig resides in Dallas with his wife, Robin, who is a Montessori school teacher. They have two grown children, Arthur and Victoria.