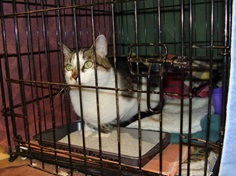 Occasionally a cat will turn up in one of our colonies that is clearly not a feral cat. These cats are attached to humans and do not have the survival skills that true ferals have developed. They do not know how to find shelter, do not know area predators, and are ill-equipped for survival in the wild, even just the “wilds” of campus. These cats do much better as pets in homes.

After first trying to find a stray cat’s owner, we do make the cats we take in available for adoption through the volunteer group. We also work with Cat Matchers, especially when we have kittens. We vet these animals before they are put up for adoption, as Cat Matchers requires.

Sometimes we are surprised to learn we are dealing with a stray, such as the time Chance, an all-white, blue-eyed male who seemed to be part of a colony, was trapped and neutered. Because he experienced minor complications during neutering, we housed him in a kennel for a few days after his operation. He turned out to be a friendly engaging guy with a great personality. No way could we return him to the outdoors. He was eventually adopted by a friend of the program, who changed his name to Coltrane, after the famed jazz musician.

Email us at cats@smu.edu if you have any questions or would like to be considered for adoption.