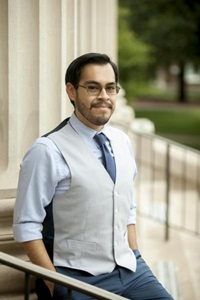 I am a first generation college student studying U.S. history, specializing in Queer history in the American South and Southwest in the 20th century.  Specifically, I am interested in Texas society during the late 19th and early 20th century.  My research seeks to place Queer studies and the Southwest borderlands in the same conversation by examining the development of Latinx Queer identity, within the confines of Mexican American cultural and religious tradition.  Additional interests of mine include: Religious studies, Mexican-American studies, Art history, and Political History.