From South Africa to SMU Meadows: 16 Years of Successes

SMU Meadows Professor of Voice Barbara Hill Moore has been traveling to South Africa since 2000 to recruit voice students to SMU Meadows. Over the years she has helped many dreams come true – including her own.

As a little girl, Barbara Hill didn’t travel outside her apartment much. Growing up in the high-density, high-crime Pruitt-Igoe housing development in St. Louis, she spent a lot of her time indoors with books.

“One was about a girl my age in Tanzania, whose dream was to change her environment through education,” says Hill Moore. “She did so through reading and teaching the youngest children in her community. I decided I would do that, too, but in a more joyful way, through music and singing.”

Realizing that dream took years. During her teens and 20s, Hill Moore worked hard developing her singing career as a soprano. She earned a Bachelor of Science in Music Education, Speech and Drama from Lincoln University of Missouri and a Master of Science in Music Education from University of Illinois. In 1965, she began teaching in the Kinloch, Missouri and St. Louis Archdiocese school systems and the following year in the St. Louis Public Schools system; in 1969, Hill Moore began her first university level appointment as an assistant professor at Millikin University in Decatur, Ill.; in 1974, she joined the music faculty at SMU Meadows.

The education part of her dream had come true; the Africa part, though, remained a distant wishful thought.

In the late 1990s Hill Moore met the Coosner family. The Coosners are from South Africa and were vacationing in Dallas. Their son, Jason, was highly interested in singing and dancing. Would Hill Moore give him private lessons? As Hill Moore taught Jason, she got to know the family better. Before long, the Coosners were urging her to get on a plane and make the trip to South Africa. With their encouragement, Hill Moore finally worked up the courage to approach the Schollmaier Foundation in Fort Worth and ask for help with travel funding.

“They gave me a grant to go for one semester,” says Hill Moore. “The plan was for me to work with singers and faculty, and identify a singer who could come to SMU for graduate study.”

She set out for South Africa by herself in 2000, much to her husband’s concern. South Africa had just suffered severe flooding from back-to-back cyclones Eline and Gloria, putting over 150,000 people in immediate danger from floods, disease and lack of food. But Hill Moore felt confident and made the leap, driving alone to townships and cities throughout the country, teaching voice technique at schools, churches, universities and community organizations.

When she returned to Meadows, she brought back not one but three South African vocalists.

The first three recruits from South Africa were Lionel Mkhwanazi, Patrick Tikolo and Maria Jooste. All three applied and were accepted to SMU, and all three received grants from the Schollmaier Foundation, which covered their VISA support, housing, insurance and clothing. 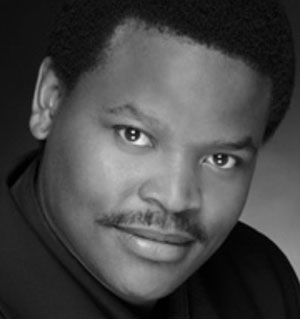 Lionel Mkhwanazi (Artist Certificate '02, M.M. '05) is a lecturer in the Opera School and Choral Academy of the University of KwaZulu-Natal (UKZN) in Durban, South Africa. He was the first black faculty member to be hired by UKZN. Photo courtesy of the Bruce R. Foote Foundation

Mkhwanazi met Hill Moore when she conducted a master class at the University of Cape Town College of Music Opera School. “I was one of the students who sang in her class,” he says. “She asked if I would be interested in furthering my music studies in the U.S., and without hesitation my answer was a big yes.”

He admits he really didn’t know anything about SMU before meeting Hill Moore, but he did recognize the opportunity right away. “I accepted the offer as a great way for me to expand my horizons, learn other cultures and get a chance to meet more people who think and share the same interests as me, particularly in line with my career path,” he says.

Through the Meadows program, Mkhwanazi’s musicianship grew stronger. He performed recitals, sang with school and church choirs and performed in opera productions on and off the SMU campus. These experiences helped lead him to the position he holds today: He was the first black faculty member to be hired by the Opera School and Choral Academy of the University of KwaZulu-Natal (UKZN), where he is now a lecturer for the UKZN program.

“Many of my students are performing and working in the professional field in and out of the country,” he says. “Studying at SMU was the most wonderful experience in my life. It gave me a solid grounding in my professional career.” Patrick Tikolo (Artist Certificate '02; M.M. '05) is now a lecturer at the South African College of Music at the University of Cape Town.

Like Mkhwanazi, Patrick Tikolo was the first black faculty member to be hired at a university; he is now a lecturer at the South African College of Music at the University of Cape Town. Bronwen Forbay (Artist Certificate ’04) is an award-winning, much-in-demand opera singer and voice teacher. “Professor Hill Moore is strong, kind-hearted and champions her students,” she says. “It has been a privilege to work with her and have her as my role model and mentor. No words can fully express the incredible impact she has had on so many of us South Africans.” Conroy Cupido (Artist Certificate ’04; M.M. ’06), a performer and author, is senior lecturer at North-West University in Potchefstroom, South Africa. His students have done well in local and international singing competitions, and many have careers in South Africa and Europe as educators, administrators and performers. “Who I am as a teacher and performer can directly be attributed to my time - almost 10 years - in the U.S.,” says Cupido. Cupido will be touring South Africa and the United Kingdom in 2016 and 2017 with pianist and Meadows alumnus Yoon Chung (Artist Certificate ’05), performing works by Schubert. 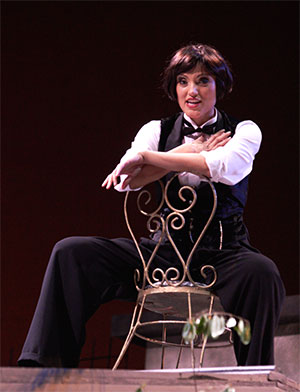 The success stories go beyond the few examples listed here. In all, Hill Moore has recruited 19 South African students to the graduate voice program at SMU Meadows since 2000. Nearly all of her recruits now hold professional positions in South Africa or in America; most also maintain performance careers.

As for Jason Coosner, the young man she coached when she first met the Coosner family, he earned an M.F.A. in Dance Performance from SMU Meadows in 2007 and is now director of the Burbank Dance Academy in Burbank, Calif. 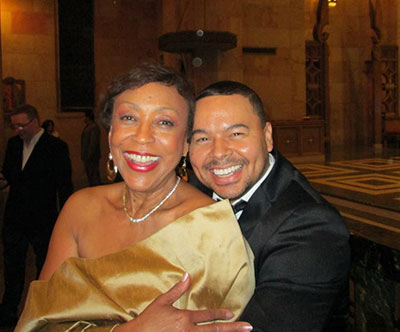 Hill Moore with Conroy Cupido (Artist Certificate '04, M.M. '06) after a concert for the Bruce R. Foote Foundation at Christ the King church in Dallas, circa 2014. Photo courtesy Conroy Cupido

Support from the Schollmaier Foundation, the Oppenheimer Memorial Trust Foundation and the Bruce R. Foote Foundation has been instrumental in bringing the recruits to America. Over the years, the foundations and other donors have supported voice students from the United States, South Africa, Europe and South America. For a full list of all Schollmaier Scholars, see the Foote Foundation website.

Listen to alumni from the program talk about their experiences.