Reading about history and standing in the actual place where it happened are two very different experiences.

Thanks to a generous gift from Santander Bank, N.A., nine master’s and doctoral students in SMU Meadows’ “Rhetorics of Art, History and Memory After the Second World War” art history class were able to travel to Berlin, Warsaw and Treblinka to deliver presentations on historical sites they had previously only read about. 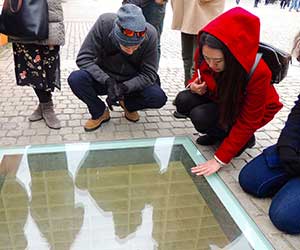 M.A. student Claire Cho (’17), who gave her presentation on artist Michael Ullman’s memorial “Empty Library” in Berlin, says she was astonished by the impact of seeing the site in person.

“Even after weeks of researching, looking at and discussing this counter-monument in class, the profundity and power of this memory site only became personally meaningful to me when I intimately interacted with the memorial and its urban landscape,” she says. “It was only after experiencing the memorial that I felt like I had something meaningful to contribute to the dialogue about this piece and the memorialization of the Holocaust.” 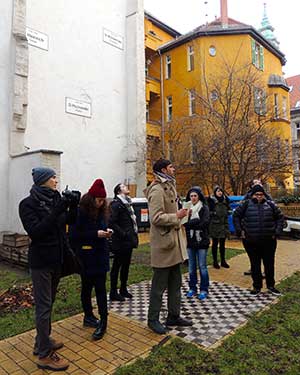 The class examined the changing relationship between art, history and memory after the Second World War, with focus on the three site cities. Associate Professor Janis Bergman-Carton, who led the seminar, selected the cities specifically because they were largely destroyed during the Second World War and because so much debate about what must be remembered has surrounded their rebuilding projects. “These cities, particularly Berlin, were so important to the history of their countries,” she says. “Politically and symbolically a lot of attention, debate and effort has been paid to what should be done with the rubble, the landscape, after the war and after the Berlin Wall came down.”

Because of the way Germany and Berlin were divided and parceled out to the victorious countries after WWII, and because of the Cold War that followed, says Bergman-Carton, East Germany, East Berlin and West Berlin developed differently. “They were divided, literally, by a wall, so there are a lot of material and artistic monuments, memorials and buildings that are inseparable from that city’s history and political evolution.”

Bergman-Carton says the on-site experience adds a needed dimension not available through books and online sources. “Most art history students study art through small, low-resolution images on computer screens and book pages,” she says. “This seminar highlighted the artificiality of experiencing sculptures, monuments, and buildings as miniature images. It gave them the opportunity to encounter art works in the site, scale, proportion and texture in which they were created. This unique opportunity in turn equipped our students with the advanced skills required to make an original contribution in art history.”

Prior to the trip taken March 3-12, the students were assigned to research a particular memorial, monument, work of art or building, either in Berlin, Warsaw or the Treblinka concentration camp outside of Warsaw. The students consumed everything they could about their site from books, articles, films, artworks and photographs.

At some of the sites, the actual buildings the students studied were no longer there, lending focus to the “memory” part of the seminar. What remained? What happened there that impacted the area? What impact does the site still have today, and how do people regard its significance?

Ph.D. student Asiel Sepúlveda (’20) researched the Reichstag building in Berlin, which had served as the center of German government from 1894 to 1933. In 1933 a fire, the circumstances of which accelerated Hitler’s rise to power, heavily damaged the building. After World War II it fell into disrepair but was reconstructed in the 1990s, when it resumed service as a government center. 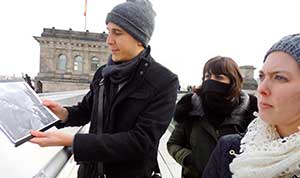 Ph.D. student Asiel Sepúlveda (’20) at the Reichstag in Berlin, holding a photo by Soviet photographer Yevgeny Khaldei, standing near the same spot where Khaldei shot the original in 1945.

“After visiting the Reichstag building, I quickly realized that despite its historical importance there are very few physical traits of its past,” says Sepúlveda. “Now, for the average visitor, it functions as a photographic backdrop. However, I found the historic Reichstag on postcards depicting key moments of the building’s life from its initial construction, its destruction in World War II and the present day reconstruction. Although the historic Reichstag is not visible due to intensive reconstruction, the picture postcard now allows the average person to consume that history as a souvenir product.

“This is particularly interesting for art historians like myself because it speaks to the importance of images in the fashioning of history.” 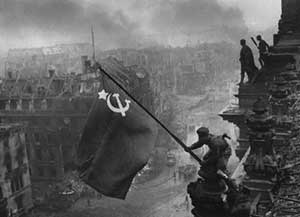 The Raising of the Red Flag Over the Reichstag by Soviet photographer Yevgeny Khaldei (1945).

As Sepúlveda presented his research to the group while standing on the rooftop of the Reichstag, he held a photograph in his hands, The Raising of the Red Flag Over the Reichstag by Soviet photographer Yevgeny Khaldei. “I held the photograph just a few feet away from where Khaldei shot it during the Red Army’s invasion of Berlin in 1945,” says Sepúlveda. “The gesture of bringing the photograph back to its place of origin, and presenting it to the class as part of the building’s history, is the perfect example of how the Reichstag has lived and continues to live as an image, first on paper, and now in digital environments.”

Marjorie Currey, a supporter of the project, arranged for the class to meet an elderly doctor who lives in East Berlin while the class was in Germany. “The doctor talked with us about what it was like to live in Berlin before the Wall went up, during the time it was up and when it came down,” says Bergman-Carton. “Her husband couldn’t join us, so he sent, for each of the students, a little hand-wrapped gift. 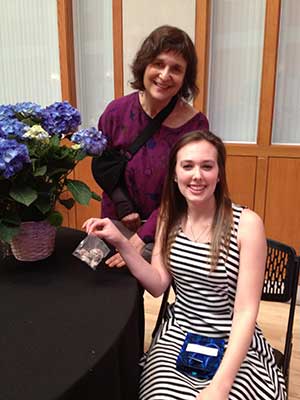 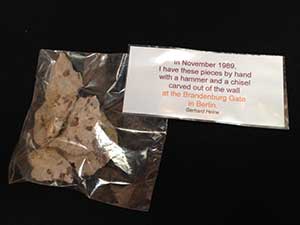 Professor Bergman-Carton and grad student Autumn Garcia with pieces of the Berlin Wall given as a gift from German resident Gerhard Heine. The note reads, “In November 1989, I have these pieces by hand with a hammer and a chisel carved out of the wall at the Brandenburg Gate in Berlin.”

“Inside each gift were small pieces of the Berlin Wall. And with them was a little note in broken English, ‘In November 1989, I have these pieces by hand with a hammer and a chisel carved out of the wall at the Brandenburg Gate in Berlin. [signed] Gerhard Heine,’ for each one of the students! We were just speechless! We were so moved.”

Instead of Final Paper, a Blog and Exhibit

Bergman-Carton says that instead of a final research paper for the class, the students are creating a blog, complete with photos, creative pieces and shorter research papers about their specific sites. In addition, five students in the class who are also pursuing their master’s in art are creating works that will be displayed in a to-be-announced pop-up exhibit.

“Because this generous gift from Santander Bank provides our students with the unique opportunity to move beyond the computer screen that mediates our understanding of the world into the physical and social environment in which that art ‘lives’ and changes day to day, we felt a particular obligation to share our work in a sustainable form that would reach the most people,” says Bergman-Carton. “For us, it is our blog.” The blog contains photographs, site information, videos and more.

In 2015, SMU and Santander Bank, N.A. announced a philanthropic agreement for the Bank’s Santander Universities to support international travel for students in SMU’s art history program. At the time, Tom Dundon, then-CEO of Santander Consumer USA Holdings Inc., said, “As a graduate of SMU, I can attest to the rewarding educational experience and the wonderful opportunities that students can participate in at SMU. Study abroad programs give students the opportunity to discover themselves while experiencing different styles of education. They also learn about new cultures and countries that broaden their perspective of the world.”

The Berlin Wall was a 97-mile-long wall that divided Germany’s capital city of Berlin. Constructed in 1961 by the German Democratic Republic (East Germany), it was purported to be a way to keep out fascist influences, but ultimately it served to keep East Berliners from defecting or emigrating to West Berlin. After governance changes in 1989, the Wall was dismantled, slowly at first by individuals chipping away at the 11-foot, 8-inch-high barrier, then by government demolition crews in 1990. German reunification formally was declared on October 3, 1990.

The Cold War was a long period of tension between the democracies of the Western world and the communist countries of Eastern Europe. The West was led by the United States and Eastern Europe was led by the Soviet Union. Although the U.S. and U.S.S.R. never officially declared war on each other, they fought indirectly in proxy wars, the arms race and the space race from 1945 to 1991.

Reichstag: The Reichstag building is one of Berlin’s most famous landmarks, first built in 1894. It was the home of the Reichstag (“Imperial Diet”) from 1894 to 1933, during the periods of the German Empire (1871–1918) and the Weimar Republic (1919–33). A fire on February 27, 1933, one month after Adolf Hitler assumed the chancellorship, triggered events that led to Hitler’s assumption of dictatorial powers in Germany. The Reichstag sustained additional damage from Allied bombing during World War II, and neglect in postwar years led to further deterioration. By the 1970s it had undergone partial restoration and became a museum of German history. More extensive restoration and renovation took place after the reunification of West and East Germany in 1990.

Seminar: A college class in which professor and students discuss topics in depth.

Art history doctoral and master’s students of the “Rhetorics of Art, History and Memory After the Second World War” class visited the sites below March 3-12, 2016, with travel support courtesy of SantanderBank, N.A.

The Reichstag, government building in Berlin of significant historical importance

The Empty Library, by sculptor Micha Ullman (1995), located in the Bebelplatz public square in Berlin

Treblinka extermination camp, built circa 1941, outside of Warsaw