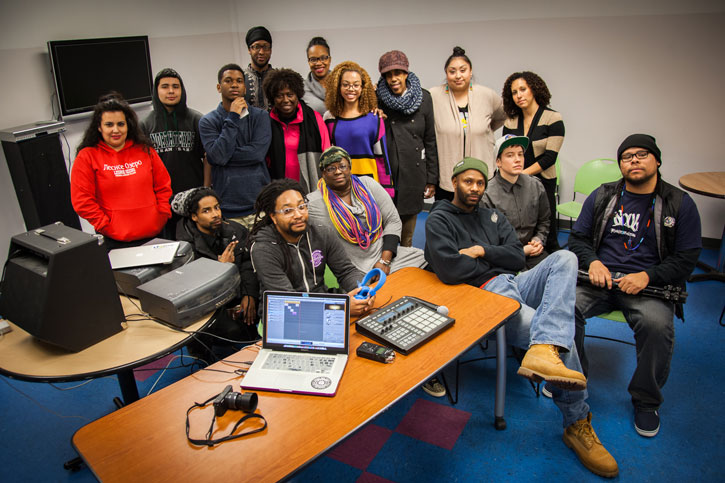 Noted Detroit-based performance artist collective Complex Movements, a winner of the 2015 Meadows Prize awarded by SMU Meadows School of the Arts, is presenting 10 free public performances of its multimedia audience participation program Beware of the Dandelions in the Tower Building at Fair Park from November 19 to December 5.

Part musical performance, part visual art installation and part community organizing tool, Beware of the Dandelions is performed for groups of 35 people at a time inside a 400-square-foot polyhedron dome-like pod structure that serves as an immersive performance art space. Beware of the Dandelions is based on an original science-fiction parable about a post-apocalyptic community working to preserve its history; the story is told through projections, hip-hop and electronic music and interactive elements. Audience members become participants and are charged with unlocking elements of the story.

A chief goal of Beware of the Dandelions is to raise awareness around local social justice issues. Launched in Detroit in 2013, it is a touring work-in-progress that incorporates issues relevant to every city it visits, gleaned from meetings with local social movement groups. Last fall, as part of its Meadows Prize residency, Complex Movements met with several such groups in Dallas, including Mothers Against Police Brutality, the American Indian Heritage Day Committee and the North Texas Dream Team, which assists undocumented youth.

“Through the process of co-organizing with local community groups, we want to create space for local Dallas groups to connect and collaborate with each other,” says Complex Movements. “Through these community cohorts we listen and learn about community resistance and resilience in the face of challenges, and exchange stories and strategies. Then, through our installations, we aim to uplift these local movement legacies and put them in conversation with movements in Detroit, Seattle and other cities where we travel with this work.”

Also as part of its Meadows Prize residency, Complex Movements participated in workshops, classes and cultural events in the Dallas community in fall and early winter 2014-15. The group spoke to classes at the Meadows School, University of Texas at Dallas and El Centro College, participated in an “Arts in the Inner City” panel at St. Philip’s School and Community Center and gave a presentation at the national Facing Race conference hosted in Dallas. At a skill-sharing/art-making workshop at the South Dallas Cultural Center, group members demonstrated how they create, then blend, different kinds of art mediums such as audio recordings, photography and song to produce a new cohesive work addressing social justice issues.

“The work of Complex Movements exemplifies an interdisciplinary approach to art-making, alongside placing community at the core of their practice. We are interested in presenting various models to our students and to the city at large of work that reflects these myriad artistic forms and events,” said Clyde Valentín, director of the Meadows School’s Ignite/Arts Dallas initiative, which oversees the Meadows Prize.

About the Meadows Prize

Inaugurated in October 2009, the Meadows Prize is presented annually to up to two pioneering artists who are active in a discipline represented by one of the academic units within the Meadows School (advertising, art, art history, arts management and arts entrepreneurship, communication studies, creative computation, dance, film and media arts, journalism, music and theatre). It includes support for a residency in Dallas, in addition to a significant stipend. In return, recipients are expected to interact in a substantive way with Meadows students and collaborating arts organizations, and to leave a lasting legacy in Dallas, such as a work of art that remains in the community, a composition or piece of dramatic writing that would be performed locally, or a new way of teaching in a particular discipline.

The Meadows Prize is now part of the Meadows School’s Ignite/Arts Dallas initiative, launched in spring 2015 and led by Clyde Valentín, former executive director of the New York City-based Hip-Hop Theater Festival. The purpose of this new initiative is to create and build programs that combine the arts and community engagement in Dallas, allowing students and others to immerse themselves in the city and engage with community members and arts institutions to create art collaboratively. The goal is to encourage people to create a cultural energy that supports Dallas – home to the nation’s largest urban arts district – and its growth as a nationally recognized arts center.