Wading Home: opera about the search for love and family in the wake of Hurricane Katrina to be performed in Dallas and New Orleans

Free performance at Dallas City Performance Hall, one night only, on Tuesday, September 15 at 7:30 p.m. 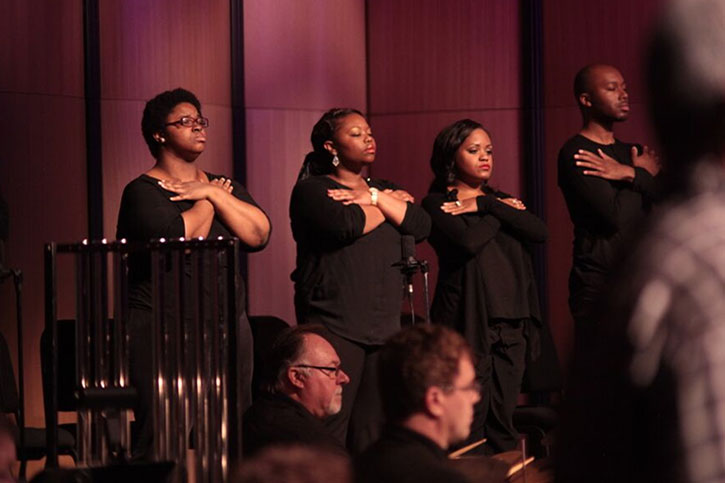 Meadows students will perform in Dallas and New Orleans.

As the nation observes the 10th anniversary of Hurricane Katrina this fall, Wading Home, a dramatic opera set against the backdrop of the devastating storm, will be presented in Dallas on Tuesday, September 15 at the Dallas City Performance Hall and in New Orleans on Saturday, September 12 at 7:30 p.m. and Sunday, September 13 at 3 p.m. at Loyola University’s Roussel Hall.

Wading Home is the story of a young musician’s struggle to find his missing father in the chaotic aftermath of Hurricane Katrina. Based on the fictional novel of the same name by Dallas author and violinist Rosalyn Story, the opera, composed by Dallas musician Mary Alice Rich, is produced in collaboration with numerous SMU Meadows School of the Arts faculty and students as well as community members from Dallas and New Orleans.

The Wading Home opera is a dream project for Meadows Professor of Voice Barbara Hill Moore, who is serving as producer and music director. Stage director is Meadows Director of Opera Hank Hammett, and the conductor is Constantina Tsolainou, former head of choral activities at the Meadows School.

“I am intensely proud of the amazing gifts of time, talent, and love of the human family and spirit, shared without compensation by SMU faculty, staff, students and alumni in this collaborative project with Loyola University and the people of New Orleans,” says Hill Moore. “The three performances of Wading Home are a community collaboration shared by Texans, Louisianans, New Yorkers, South Africans and a host of people from around the globe with the people of New Orleans and of Dallas.” 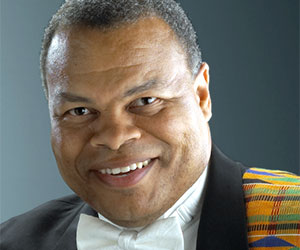 The show opens with Meadows alumnus Donnie Ray Albert (M.M. ’75) in the role of Simon Fortier, the father who becomes lost after Katrina hits New Orleans. In the first scene, Fortier, a famous French Quarter chef, is at home preparing his renowned red beans and rice dish as he listens to the wind pick up outside. “It’s just another storm…” he intones, unaware of the magnitude of the hurricane about to hit New Orleans and the Treme neighborhood in which he lives.

Other leading roles in the Dallas performance include established opera singers and Meadows alumni Leon Turner (M.M. Voice ’92), playing the role of Julian Fortier, the successful musician son who has left New Orleans for fame in New York City, and Bronwen Forbay (Artist Diploma ’04) as Velmyra, Julian’s former love who helps him reconnect with his Louisiana roots and his lost father. Also sharing the stage will be opera singer Quintin Coleman (M.M. Voice Performance ’15 and Performer’s Diploma ’17) as Julian’s old trumpeter friend Grady Casey, with whom Julian has lost touch during the years he has been performing around the globe as a famous jazz musician.

The show will make its New Orleans debut with most of the Dallas cast and crew as well as several New Orleans groups, including the University Chorale from Loyola University’s College of Music and Fine Arts; OperaCréole; and the Chalmette High School CHS Voices. The Children’s Chorus of Greater Dallas will not be traveling to New Orleans, and instead the New Orleans Children’s Chorus will perform.

Hill Moore acknowledges the considerable effort put forth by so many groups in creating Wading Home. “The responsibility of producing such an enormous collaboration has been made deeply heartwarming because of the knowledge of the amazing endurance of those who suffered through Hurricane Katrina and the aftermath of the flooding 10 years ago,” she says.

“We are all inspired by the generosity and support provided by Dean Sam Holland and the Meadows staff and students, the Bruce Foote Memorial Scholarship Foundation, The Dallas Black Academy of Arts and Letters, and SMU alumni from all over the world who have made it possible for us to focus on sharing this beautiful story of love and endurance of the human spirit. I extend my very deepest gratitude and thanks to everyone who has so generously supported this effort.”

Wading Home is one of only a handful of operas designed specifically for African American performers.

“There are a number of such operas, but they are usually done once, then put away,” says author Rosalyn Story, who along with Mary Alice Rich, is a librettist for Wading Home. “We believe that the resonance of the Wading Home story will last much longer, as it touches on many relatable levels. It has a mix of people: black and white, young and old, rich and poor. We’ve heard from audience members who have seen Wading Home and say it touched them on several emotional levels.”

While the production is based on a fiction novel, it reflects a time of actual disaster that impacted thousands of lives. Meadows Director of Opera Hank Hammett, stage director for Wading Home, says the Meadows voice students prepared for this opera differently than the way they would have prepared for other operas.

“The stories of many operas reflect actual historic events, so they are a combination of facts and fiction,” says Hammett. “It’s rare, however, that the events occur in our own lifetime.”

Many of the people involved with Wading Home have been to New Orleans in the past 10 years, says Hammett, and know people who lived through the disaster first-hand. “With very little research,” he says, “they can jump right in and get in touch with the deep, human and personal experiences that are at the heart of telling the story of Wading Home: loss, trust, the yearning for connection and love.”

Admission to the shows is free. Donations will be accepted for two nonprofit organizations that support needy children and young people through music: The Roots of Music, a New Orleans-based community music organization for children, and the Bruce R. Foote Memorial Scholarship Foundation, a Dallas-based organization supporting singers studying voice at SMU.

The performances are being produced with support from the Dallas-based organization, The Black Academy of Arts and Letters (TBAAL), with funding from the Meadows School of the Arts and the Bruce R. Foote Memorial Scholarship Foundation. The Foundation’s mission is to encourage and support students with a background that has been historically underrepresented in the advanced pursuit of classical vocal study.

The opera originally premiered in Dallas in April 2015 to a packed house at the City Performance Hall. It was produced in partnership with TBAAL and was made possible through an MPower grant from the Sphinx Organization, a Detroit, Michigan-based nonprofit that promotes diversity in the arts through support of African-American and Latino musicians. Ms. Story’s $40,000 award was the largest single grant given by Sphinx in its highly competitive selection process. 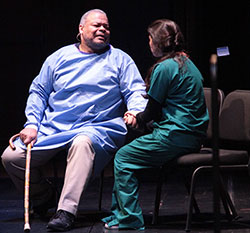 Read more about the Sphinx Organization, which seeks to transform lives through the power of the arts.