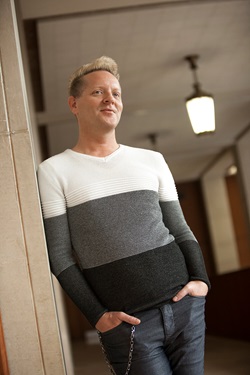 Joe Hoselton is a native-born Texan, having grown up between Dallas and Fort Worth. He attended the University of Texas at Arlington where he received his Bachelor of Music in music education in 2000. While studying at UTA, Hoselton was a student leader, working closely with the director of the marching band as drum major for four years and holding multiple offices in his fraternity. It was in these student leader roles that he first discovered his interest in recruitment by visiting high schools around Texas to promote the marching band program and to inspire interest from young musicians toward the study of music.

Not long after completing his degree, Hoselton joined the Meadows School of the Arts at SMU, working directly in the Division of Music. Two years later he moved into the Meadows recruitment office, expanding his role to recruit for all divisions of Meadows. In 2008, Hoselton then became director of graduate admissions and now, having just celebrated 15 years with SMU, is also responsible for institutional research, a broad category of work done to inform decision-making and planning in areas such as admissions, financial aid and enrollment management. Hoselton is also an alumnus of the Meadows School of the Arts, having completed his Master of Music in music education in 2014.

Hoselton enjoys the challenge of managing data, developing workflow processes for the Meadows admissions department and engaging aspiring graduate students in the arts. Outside of Meadows, Hoselton is an accomplished entertainer in the art of female illusion, performing weekly in Dallas’s Rose Room and having held the titles of Miss Gay Dallas, Texas and Miss Gay USofA. He attributes his personal success in entertainment to the inspiration he’s drawn from the talented and creative students here in the Meadows School of the Arts.