Would you like a phone that trains itself (based on what you do and where you go) to improve the speed at which you access the network by up to an order of magnitude? Or would you like your phone to tell you which direction to turn to take your device from no bars to multiple bars of cell signal at the same location? 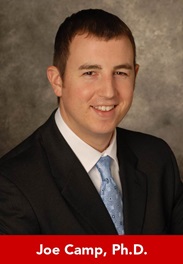 Most likely, you take one or more wireless devices with you nearly everywhere you go. Through various sensors, these devices have the ability to perceive where they are and observe the changes that result in your wireless connectivity. However, up to this point, the relationship between what you do and where you go has not been leveraged to improve your mobile Internet speed. In this talk, we discuss how users and their locations can dramatically improve wireless performance.

Dr. Camp’s research interests are in the areas of crowdsourcing, data analytics, and wireless networking, specifically focused on the deployment, measurement, and analysis of large-scale wireless networks and the development of embedded protocols for network hardware. His research team has performed over 200 million in-field wireless measurements around the world through Android deployment and local characterization via campus buses, vehicles, and buildings.

Camp previously served as the chief network architect for the Technology for All (TFA) Network, a mesh deployment in Houston serving 4,000 users in an under-resourced community. He received the Ralph Budd Award for the best engineering thesis at Rice University (2010), the National Science Foundation CAREER Award (2012), and SMU’s Golden Mustang Teaching Award (2014).

Dr. Camp earned his Ph.D. in electrical and computer engineering (ECE) from Rice University. He received an M.S. at Rice and a B.S. with honors from the University of Texas at Austin, both in ECE.