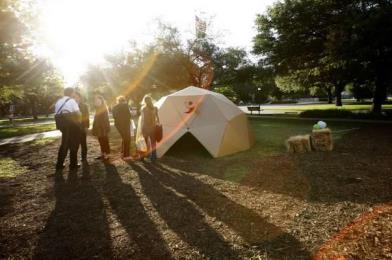 In the heart of Southern Methodist University, where the lawn is well-watered and the brick buildings have stood for decades, Prakash Koirala’s voice cracked.

Koirala gazed at a handful of temporary huts, and they reminded him of the nearly 20 years he spent in southeast Nepal as a man without a home.

“These tents, we used to have these kinds of tents in the refugee camps,” he said. “When I see this, really, I felt something, a little bit of emotion.”

SMU students built a temporary village to develop practical and cost-effective innovations for refugee camps in the developing world. Some interviewed resettled refugees and slept in the huts last week to get a sense of life in the camps.

The refugees recalled missing the ability to grow crops, worship at temples and have the sense of purpose that comes with a job. At the camps, they said, it was harder to maintain a community and pass along cultural traditions to their children.

The students answered with possible solutions, such as a raised bed, a portable garden, a pagoda for prayer and a solar-powered computer station where refugees could locate neighbors or family.

“It’s important to show students what living in a post-conflict or post-disaster or developing country is like,” said Andrew Quicksall, assistant professor in civil and environment engineering and faculty adviser for the campus chapter of Engineers Without Borders. “While it’s not the same — we can’t take Somalia and put it on the ground at SMU — it does provide a window in.”

“Here we are in the Park Cities, surrounded by affluence, and they are in sleeping bags all week long,” he said. “They understand the gravity of the problems we are emulating here.”

The students’ work was also informed by the experiences of refugees who have settled in the Dallas area, including Koirala, a Bhutanese refugee who lives in Fort Worth.

Faith Nibbs, who teaches anthropology, read student blogs from the first year of the Living Village and noticed they were missing a key element.

“It’s not just about structures, it’s also about the people you’re providing structure for,” she said. “We wanted to bring the Living Village to life.”

This year, her anthropology students interviewed resettled refugees from Bhutan and Burundi and asked about needs that can be forgotten at camps designed for physical survival.

Charity Tooze, a spokeswoman for the Office of the United Nations High Commissioner for Refugees in Washington, D.C., toured the village. She said its installations addressed refugees’ desire for normalcy and purpose, despite being far from home.

“The anthropology students were unique in looking at the refugees as whole people, not just needing food, a tent and water,” she said.

Nearly 43 million people around the world are displaced, due to persecution, natural disaster or other crises, according to the office of the U.N. High Commissioner for Refugees. The average stay in a refugee camp is 17

For students, the project was a far cry from lecture halls and textbooks.

“A lot of the things we do in school are so hypothetical,” said Farrah Salisbury, a senior majoring in international studies, who helped create the worship space. “But this is a real problem and we were able to come up with a real solution that could be used.”

Taylor Henry, a sophomore majoring in civil engineering, said he was drawn to SMU because of the Hunt Institute and its mission to do good works through engineering, one that resonated with his Christian faith.

He tried to be true to the refugee experience, limiting his water intake and his showers.

As night fell, it was possible to forget that the village was in the middle of the college campus, he said. Without the glow of a computer screen or buzz of a cellphone, students talked, tossed glow-in-the-dark Frisbees and strummed the guitar.

“We are apart, even though we’re right here,” he said.

Meera Day, a sophomore majoring in mechanical engineering, said that a week of living in the huts opened her eyes to challenges that refugees face, like vulnerability to the heat, mud from the rain and loud noise late into the night.

“We’ve been given the chance to learn,” she said. “Now, it’s our social duty to use our skills to help other people.”

AT A GLANCE: Ideas from the Living Village

Portable garden: A durable 4-by-8-foot raised garden bed fits together like Lincoln Logs and can be easily transported. Refugees could grow crops to feed their families, which would offer a greater sense of self-sufficiency.

Pagoda: In a small temple with simple decor, like a rug and small statue, refugees could worship close to their own tent and without the need to leave the safety of camp.

Job center: At this tent, refugees could be matched up with jobs like midwifery, construction, volunteer coordinating and other roles that are necessary in any community and can offer a sense of purpose.

Family connection center: With the assistance of a solar-powered computer, refugees can more easily locate family, friends and neighbors. It would be based on software used by the Federal Emergency Management Agency and could also list people by traditional groupings, like tribes and clans.

Cultural center: Far from a home country, refugees fear loss of traditions. Under one roof, refugees could pass along their culture to their children, whether through music, art or religious traditions.“Rajo” shelter: The easily-assembled tent, designed by SMU engineering students, is made of chicken wire wrapped and tied to a plastic frame with rope. It does not need to be bored into soil, so it could be set up on desert or beach sand.