Summer isn't a day at the beach for high-school students Nikal Morgan and Angel Tezeno. For the pair of friends and the other girls in Don Ruggles’ classroom at Southern Methodist University’s Lyle School of Engineering Camp for Girls, time off from school means more hard work and a chance to explore potential career paths. 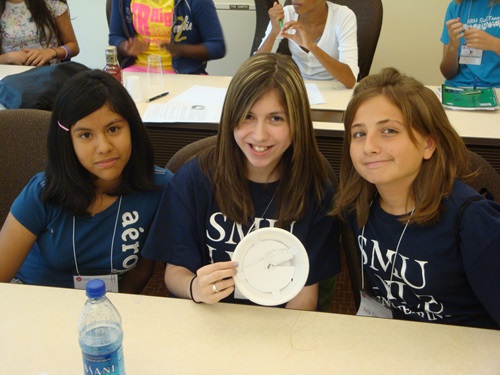 “We found out about it from our moms,” Nikal said. “I’ve always liked math a lot, and my mom told me, ‘If you like math, you should be an engineer.’”

“I really want to be a doctor and so, I thought maybe I could look at biomedical engineering,” Angel said. “This camp is helping me with that.”

The camp was started by administrators to engage female students in the field of engineering. It complements the Caruth Institute for Engineering Education's Gender Parity Initiative, the aim of which is to bolster matriculation of women in SMU's engineering program to ultimately achieve a 50:50 male to femaile ratio of degree seeking students. Campers are often referred to the program by a teacher, many of whom train in SMU's Infinity Project, an engineering curriculum for middle-school through early college students.

“With the camp, we really wanted to grow our own future students,” said Associate Dean Tammy Richards. “We’ve had the camp long enough now that it’s been fun to see the girls come back and enroll who have been our campers.”

Part of engaging campers, Richards said, is relating to them at a young age. Making science applicable to the lives of young people is key to keeping them interested; students want to know what technology lies behind the electronics they use each day.

“I think people connect that you have to be an Einstein in math to be an engineer and that’s not true,” Richards said. “You have to be comfortable in math, but it’s the enabler. Math is the language for engineering, so once you become conversant you can write the stories, you can do the projects, you can create things for other people.”

University of Texas at Arlington student Triana Horton works as a teacher’s assistant to Ruggles. She oversees hand-on labs that nurture a spirit of empirical learning; units include constructing a bridge from paper and masking tape and creating a speaker from a salad bowl and wire.

“A lot of girls have that misconception that engineering is a male thing,” Horton said. “By participating in this, I feel like I can let them know that anything is possible. The sky is really the limit; I don’t think a lot of young girls know what an engineer really is and what an engineer can do. The possibilities are really endless. The definition is really broad.”

Getting out from behind a desk gives students a sense of autonomy and excitement.

“The hands-on [learning] is really helping us figure out what goes into engineering,” Nikal said. “[Mr. Ruggles] gives us an idea of what we need to be doing and then it’s up to us to do the rest.”

“You’re going to do things with others,” Richards said. “This is about team-building, you’re not alone or in a cubicle. We are telling these girls, you can take all your creativity and all your smarts and meet others like you who what to use what they’re good at for a common goal.”

To Richards, it is the sense of purpose instilled in each student that gives them the ability to press on in a field that may have at first appeared daunting.

“I think young people today want to make a difference, they want to do something that’s going to help improve life, society, their family and their friends,” Richards said. “We put engineering in that context; we’re solving problems around them.”