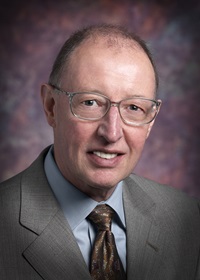 Department of Electrical and Computer Engineering

One of the preeminent researchers in electronic design automation, Ron Rohrer’s contributions to improving integrated circuit (IC) production span over 50 years. Rohrer realized early on that circuit simulation was crucial to all aspects of IC design, and introduced a sequence of projects in courses at UC Berkeley that evolved into SPICE, now the industry standard for IC simulation. Decades later at Carnegie Mellon University, he introduced the Asymptotic Waveform Evaluation(AWE) algorithm, which enabled efficient timing simulation of ICs containing extremely large numbers of parasitic elements.

He is a legendary inventor, author & co-author of 5 patents, 5 textbooks and more than 100 technical papers. He was founding editor of the Institute of Electrical and Electronics Engineers (IEEE) Transactions on Computer-Aided Design of Integrated Circuits and Systems from 1981-1984 and President of the Circuits and Systems Society of the IEEE in 1987. Rohrer was made Fellow, IEEE in 1980, and inducted into the National Academy of Engineering in 1989. He has served on numerous AIEE, IEEE, NAE and US Government committees.

In addition to his academic career, he has been involved in over a dozen start-ups and has held executive positions in publicly traded companies. Rohrer is currently the Cecil & Ida Green Professor of Electrical and Computer Engineering in the Lyle School of Engineering at Southern Methodist University’s (SMU).

National Academy of Engineering
The Academy of Medicine, Engineering and Science of Texas (TAMEST)
IEEE Life Fellow
Author and co-author of five textbooks and more than 100 technical papers
Holder of six patents
Recipient of 11 major awards, including the IEEE Education Medal and the NEC C&C Prize