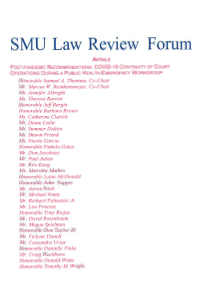 The SMU Law Review Forum is the online counterpart to SMU Law Review, the flagship journal at SMU Dedman School of Law. The Forum specializes in short-form, timely articles that are reviewed and published on an ongoing basis and with an accelerated schedule.

The SMU Law Review Forum started seventy-two years after SMU Law Review’s first publication in 1947 and serves as a new format for authors to engage in timely debate on important legal issues. As SMU Law Review’s online counterpart, the Forum provides another platform for professors, practitioners, judges, legal scholars, and students to explore the implications of recent legal decisions, events, and trends. The Forum strives to publish contemporary scholarship and elevate the work of diverse individuals whose identities, viewpoints, and ideas have often been underrepresented in the legal field.

How Should the Statute of Frauds Apply to Reliance-Based Contracts?

By Gregory Scott Crespi – The “sufficient writing” requirements of the Statute of Frauds were formulated with bargain-based contracts in mind. It is often difficult if not impossible for persons to meet those requirements for reliance-based contracts, since this would require them to produce a writing signed by the promisor that not only sufficiently evidenced the promise, but also provided sufficient evidence of the other elements of such reliance-based contracts: the foreseeability of their subsequent reliance upon the promise, the fact of their reliance, and that failure to enforce the promise would be unjust. [...]

By Michael Showalter – In recent years, a number of commentators have asserted that new corpus- linguistics evidence undermines the U.S. Supreme Court’s 2008 landmark holding in District of Columbia v. Heller that the Second Amendment protects an individual right to possess and carry weapons. But these commentators have misused corpus linguistics, and their analytical errors underscore that judges should exercise caution when invoking corpus data and should not uncritically accept conclusions drawn by linguistics experts. [...]

By Tom Kimbrough – This paper concerns the business of law, a subject ignored by legal academia and sugarcoated by the organized bar. If law professors express little or no interest in this subject, their students most certainly do. [...]