This year’s problem involved a Texas oil and gas company accused of deceiving investors about its environmental commitments, practices, and risks after a series of undisclosed reports of seismic activity culminated in an earthquake which destroyed the company’s toxic wastewater storage at its fracking site. 3L Rhian Jones addressed the first issue, whether the 8 challenged statements were actionable material misrepresentations—not mere corporate mismanagement or puffery—and whether they were made with the requisite scienter as required to state a claim under Section 10(b) and Rule 10b-5. 2L Madison Gafford addressed the second issue, whether a claim for control person liability under Section 20(a) requires a plaintiff to allege a culpable participation element.

The team was coached by John Atkins of Thompson & Knight and Peter Flynn of Locke Lord. Please join the BOA in congratulating these advocates on their hard work and success! 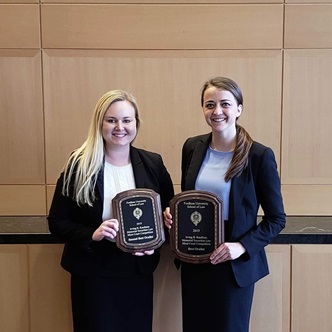 On February 9th, two teams from SMU competed in the annual Saul Lefkowitz Moot Court. The competition introduces students to important issues arising in U.S. trademark and unfair competition law, codified in the Lanham Act. Approximately 80 teams participate in the competition each year. Please join the BOA in congratulating the team on their hard work! 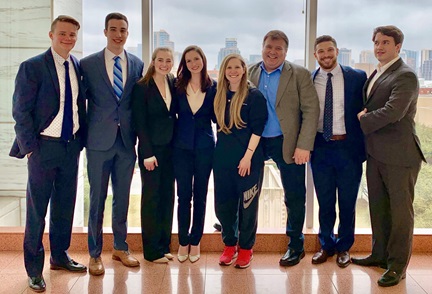 The SMU Pace Environmental Moot Court Team, Yliana Trevino-Hawkins, Sarah Surgeoner, and Andrea Reed, had a great competition. In a field of 55 teams, our team advanced to the semi-finals and their brief was selected as the best brief for appellee in the competition. Professor Gaba coached the team and is very proud of their performance. Please join the BOA in congratulating these advocates on their hard work and success! 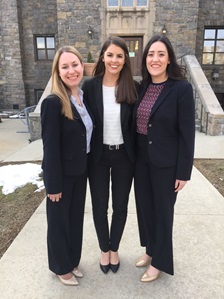 The SMU team competed at the Tulane International Baseball Arbitration Competition in New Orleans. The team is comprised of Megan Kohner, Chip Pierce, and Cort Hoge. The team was coached by Matt McConnell, who is Vice President and General Counsel at SSG Baseball, as well as a Certified Player Agent by the Major League Baseball Players Association.

The team went 2-1 and received scores of 80, 89, and 95 (out of 100) on their three oral arguments on Wednesday. The 95 was tied for the best mark on the entire day! During the first argument, they faced their best competition. Opposing counsel in that hearing (St. John's) received the Best Written Advocacy award. During the second hearing of the day, the team beat Cleveland-Marshall College of Law. In the third hearing they went up against William and Mary. Judges gave very positive feedback for the team, indicating that the SMU Law students could litigate an arbitration case today and do just fine, that the presentations were the best all day, and that SMU's exhibit book was more impressive than some attorneys' work product.

The competition was a success! The students worked well as a team, mastered the complex arguments, created persuasive briefs, and zealously presented their cases. They represented SMU Law with class and made a strong first impression on the competition and the event! Please congratulate these advocates on their hard work and success! 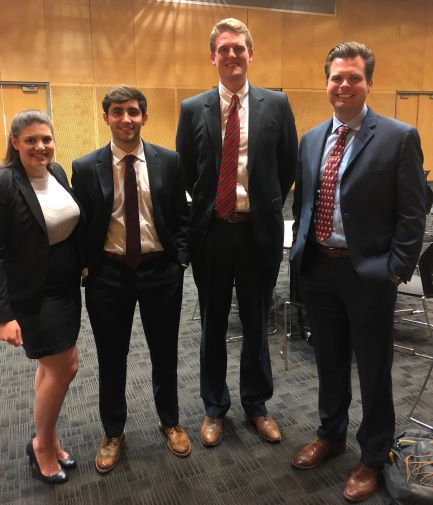 On October 28, 2018, two of SMU's teams competed in the Dallas Regional for the ABA Labor and Employment Mock Trial Competition. The first SMU team included second year law students Andrew Gray, Tom Whitten, Blaire Beene, and Ryan Musser, who took home the title of Regional Champions! After besting teams from the University of Texas and University of Mississippi, the team went head to head with the second team from SMU in the final round. Based on their win, this team will advance to the National Competition, which will take place in January of 2019 in New Orleans. The team is coached by Katherine Handy Calhoun (Texas Tech Law ’15, Bowman and Brooke LLP) and Luke Calhoun (Texas Tech Law ’14, Collin County District Attorney’s Office). And, special thanks to Brendan Farrelly who is the toughest witness on the planet! The second SMU team included Connor Barbe, James Peacock, Roslyn Dubberstein, and Faith Castillo. They advocated their way to the final round of the competition and missed moving on to Nationals by one vote. The team is coaches by Courtney Floyd and Catherine Schneider. The team would like to give a special thanks to Gigi Girling, their brilliant fifth comrade. Please congratulate these amazing advocates on their hard work! 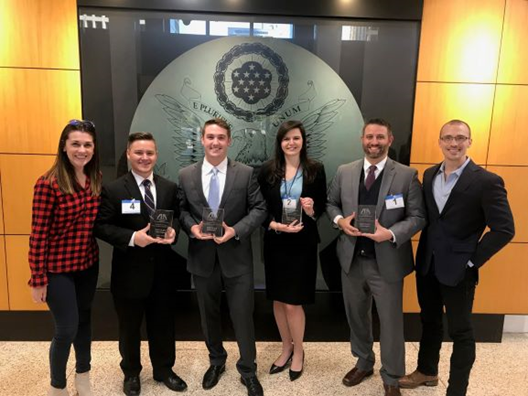 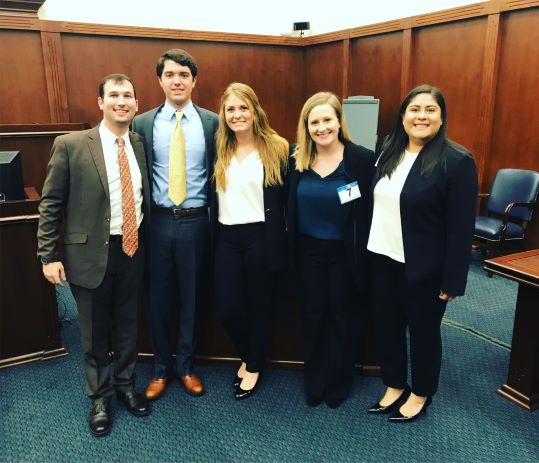 Congratulations CHAMPIONS!  The ABA Arbitration team, coached by Stephanie Gonzales '09 and assisted by Jib Zaidi '15, competed in 4 rounds of competition at Chapman University in Orange, CA on November 17 and 18.  The team consisting of Briana Blackman, Charles Entsminger, Ty Harding, Cecilia Jimenez, and Karina Rambeau went undefeated and were awarded Regional Champions.  Team Respondent consisting of Ty Harding and Karina Rambeau had the momentum and were chosen to compete as the attorneys in the semi-final and final round.  Our CEO witness, Briana Blackman, and care attendant witness, Charles Entsminger, nailed their performances as well and were able to trip up the other team on cross examination.  Special thanks also goes out to Lauren Pfieffer who helped the ABA Arbitration team prepare for competition.  The ABA Arbitration team will be proudly representing SMU at the National Competition in Chicago on January 25 - 27.  Good luck, ABA Arbitration team! Please join the BOA in congratulating these students on their hard work and success! 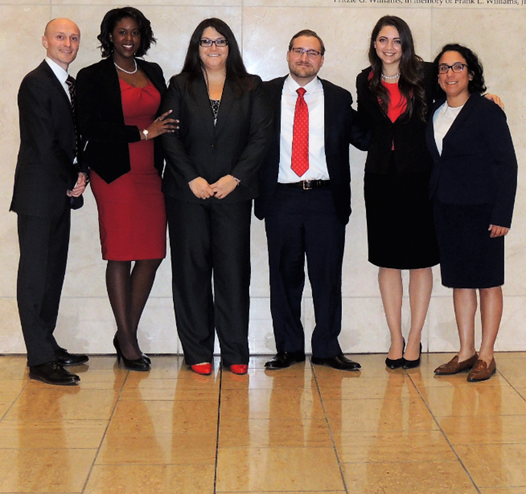 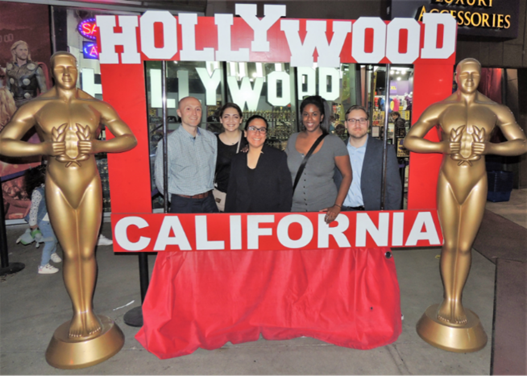 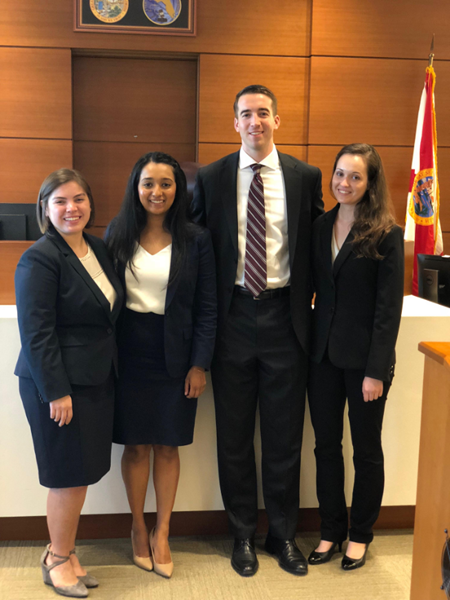 Two weeks ago, the San Diego Defense Lawyers Mock Trial Team competed in San Diego, California.  The team is comprised of advocates Sara Reams, Katie Davis, Jet McGuire, Nikki Britten, and Austin Hamby. The team was coached by Ali Fritsche, Allison Reppond, and Ian Ross Phillips. Everyone on the team would like to thank its amazing shadow, Alesha Nichols, for all her hard work in helping the team prepare for competition.

This year’s problem involved a school shooting scenario and hinged upon whether a doctor had a duty to break his oath of confidentiality. The plaintiffs contended that the doctor had a duty to report the shooter after he made troubling statements about resorting to violence during counseling sessions before the shooting occurred. The defense argued that there was no possible way the doctor could have foreseen the actions taken by the shooter.

The competition was composed of 14 teams from across the U.S. Our advocates won their first trial and were mere points away from being one of the 4 teams advancing into the semifinal round. Please congratulate each of them on a job well done! 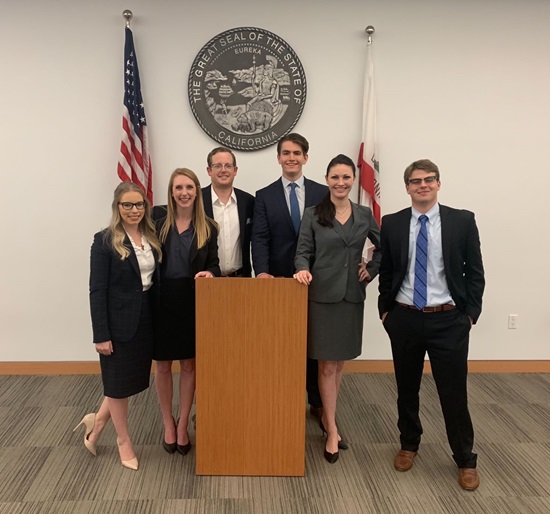 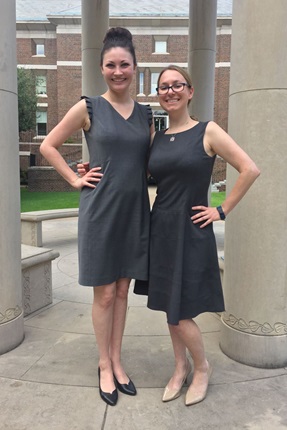 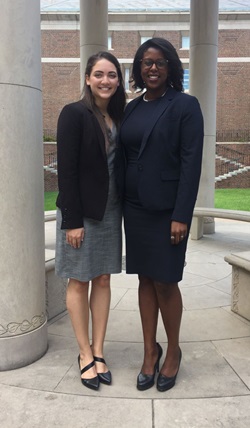 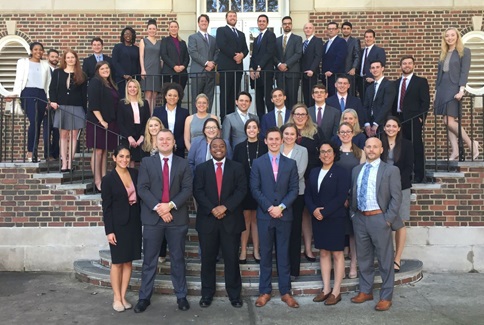 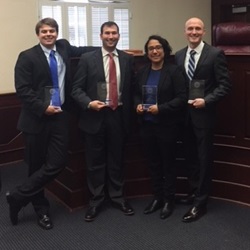 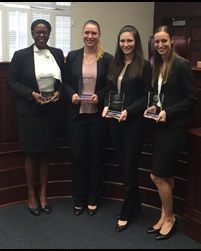 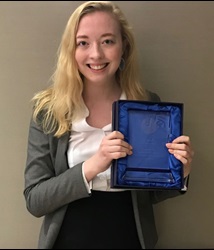