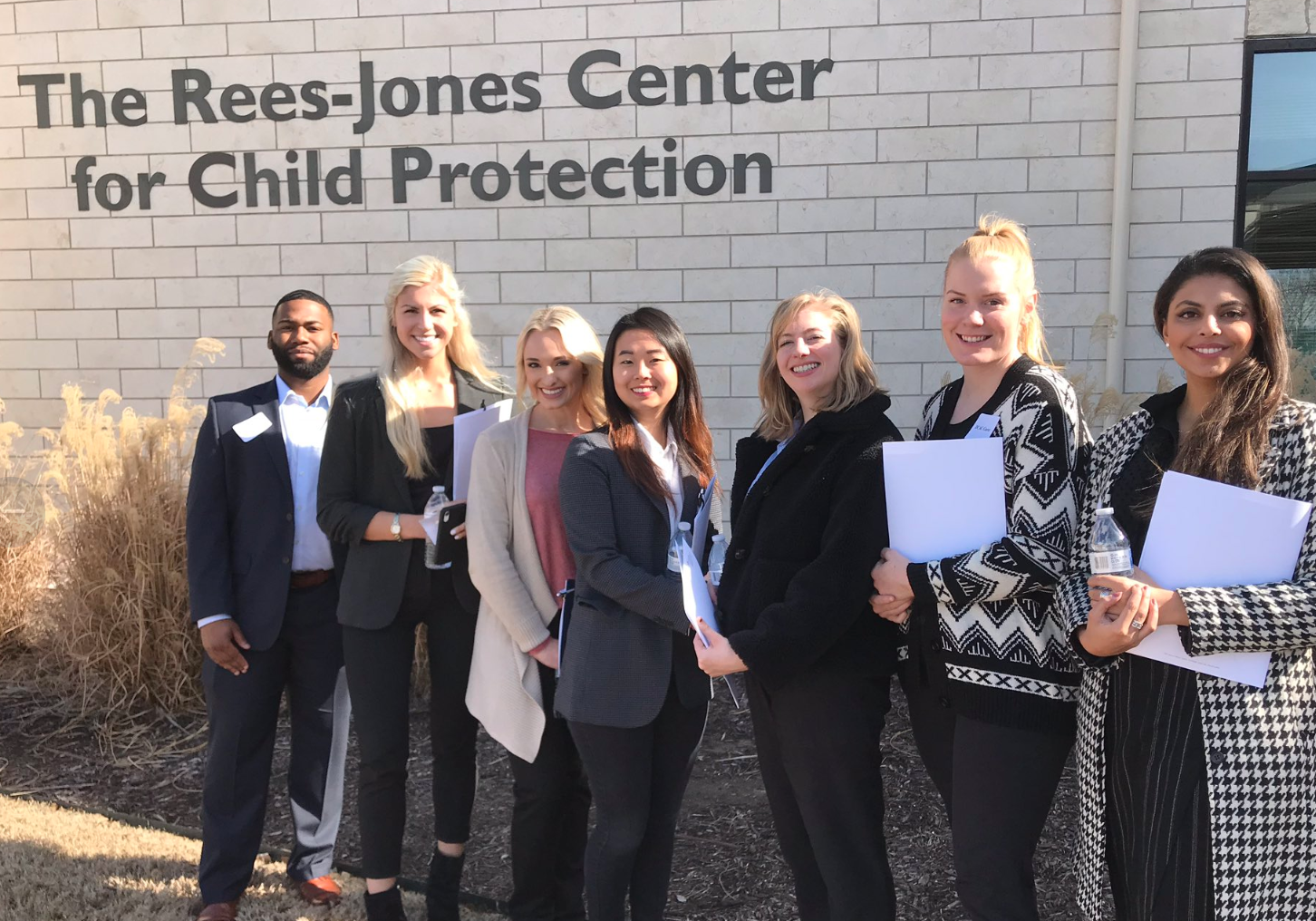 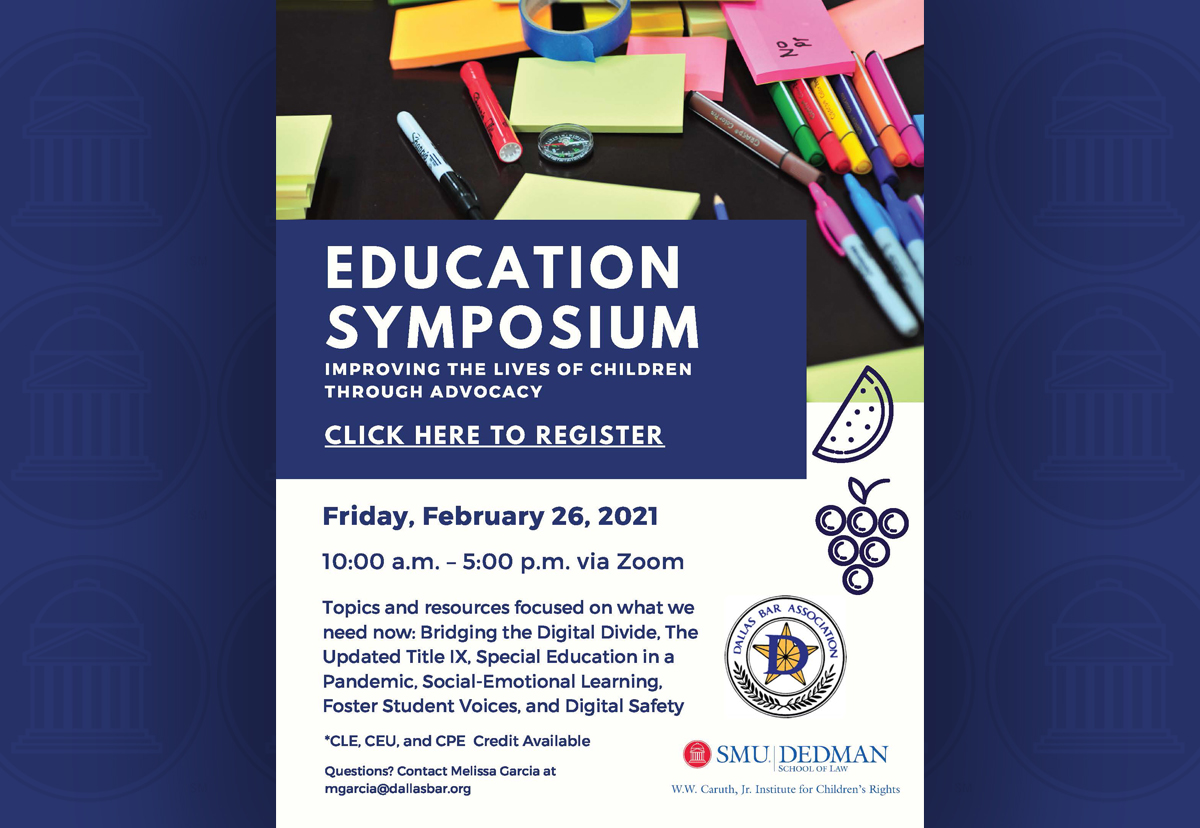 Topics and resources focused on what we need now:  Bridging the Digital Divide, The Updated Title IX, Special Education in a Pandemic, Social-Emotional Learning, Foster Student Voices, and Digital Safety 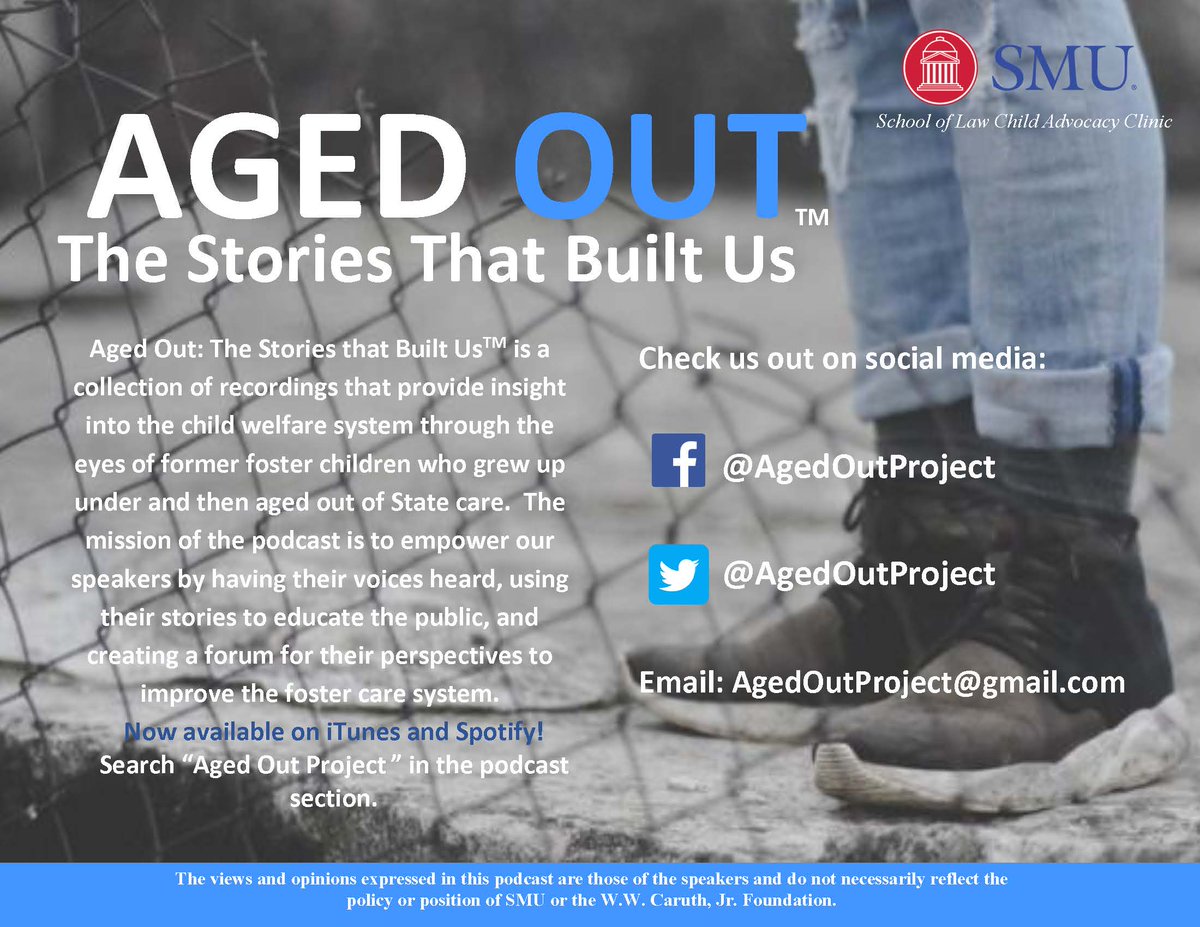 A podcast by the SMU Child Advocacy Clinic created to raise awareness regarding the child welfare system while giving youth who aged out a voice to transform it. Click Learn More to listen to the newest episodes! 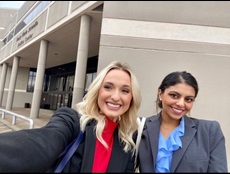 Soon is not soon enough for adoption. Kayla Chowning and Raheela Ahsan had a quick start to the Spring semester when they represented their client in a Chapter 263  Permanency Hearing regarding her adoption in early February. Kayla and Raheela were able to provide the client’s caregivers with information of the Adoption Assistance program and put an emphasis on the importance of a speedy and efficient transition into the adoption process during their recommendation to the court. They walked out of the courthouse that morning knowing they advocated for their client’s best interest.

Do Your Homework, Kids. Christiane Kim and Kala Simpson had the opportunity to participate in a Collaborative Family Engagement meeting with a large team of professionals that advocate for foster children’s best interest. Christiane and Kala didn’t want to be treated as "students" who were just taking up space, so they diligently prepped by reviewing a bulky file of materials. By doing that groundwork, they were fully engaged and able to answer very detailed critical questions about the clients’ past and present situation.

They went on to vigorously advocate for their client’s best interest in their first hearing. Even though they were advocated for a position adverse to other professionals long on the case, the judge adopted Christiane and Kala’s position. This paved the way for their client to be placed in a foster-to-adopt placement with his siblings who he had been separated from for years. And now the siblings have been adopted into a loving family!

Attorneys and Friendly Listeners. Student Attorneys Ally Murphy and Paige Calabrese represented siblings who were separated throughout the foster care system. The oldest sister, having experienced trauma during the course of her childhood and more by the separation from her siblings, felt isolated and unheard. Ally and Paige enjoyed many meals, shopping trips, and uncontrollable laughs with her. By forming an empathetic relationship, and listening to her, they were able to connect with her in ways that enabled her to better hear their legal advice so they could effectively advocate for her best interest in the courtroom. 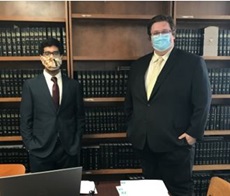 Those masks are covering up BIG smiles. Clinic students, Ahmad Awaal and Nick Curley, achieved the result they sought in their very first trial! They diligently worked in their role as Amicus Attorney to give a recommendation to the court as to what was in the best interest of their clients. Ahmad and Nick gave the Judge their recommendation and she agreed. The ruling reflected this recommendation, which was what the twins had expressed they wanted as well. Nice work guys, hard work pays off! At the end of the semester, they handled another contested case for another client, questioning witnesses, and again achieved the result they sought! What a team!

The hearing is NOT happening – until it does. After the District Attorney assured Child Advocacy Student Attorneys Ayu Fitzgerald and Victoria Petty that the 14 day hearing would be continued to a new date, the Judge begged to differ. But Ayu and Victoria had already learned the facts of their case and were ready. Ayu examined two witnesses and Victoria was about to examine another when the Judge decided they were right – and gave our client the relief Ayu and Victoria thought was in his best interests.

What’s in a name? Ask Child Advocacy Clinic Chief Counsel, Tasheena Byrd, who represented one of our clients in a recent hearing to get his name changed to reflect what his true name should be. With the name change order, his grandmother caregiver could get his social security card changed, get him recognized by the Choctaw Nation for his ¼ Choctaw blood, get him the benefits that come with that heritage, and achieve the same results for his sibling. Names matter.

Child Advocacy Clinic lawyers advocate for children early and often! Student Attorneys David Parsi and Lauren Pfieffer started their semester off at a fast pace when they were assigned a case that had a 14 day hearing" the first week of class. They had to investigate, meet witnesses, interview them, and analyze what the best result would be for client, while literally putting together the case file. They walked into court that morning prepared and ready to advocate for their client.

Real vs. As Seen on TV Lawyers. Kyle Kertz, and Erin Leamon had a case in the Spring semester where Erin examined an important witness in a “14 Day Hearing.” Examining witnesses is something of an art form, and the lawyers on television make it seem so easy.   But TV witnesses are scripted to say exactly what the lawyer wants. Not so in real life!  Erin formulated questions, listened, and adapted as her witness answered. And, ultimately, Erin and Kyle got the relief that the other parties resisted, but that they believe will serve our client’s best interests.

When one Case Closes Another Sometimes Opens. Juliann Wilbar advocated for her clients all semester – brothers who were 17 and 2. She worked to ensure that when the “termination” phase of the case came to a close, each of them received the relief best for them – and that was suited for their very different needs.  Although that part of the case closed, one of her clients will still be our client until he ages out of the foster care system. Juliann will continue her work for him advocating for and supporting him during this critical phase of his life when she returns in the Fall as one of the Clinic’s Chief Counsel.

A Podcast to Provide a Voice for Aged Out Foster Youth.  Over the past four semesters, Clinic student lawyers worked diligently to prepare a podcast to give former foster youth a voice and a venue to make their own “calls to action: “Aged Out:  The Stories that Built Us.”  The Spring class advanced this project over to the brink of the finish line by completing enough foster youth stories for the podcast to launch in the Fall.  Clinic students even were interviewed by WFAA TV about the project.

Clinic Chief Counsel Attorney Kayla Johnson. In terms of specific client-related accomplishments this semester, probably the most fulfilling was the successful transition of two long-time clients—six- and eight-year-old brothers—from foster care to their forever home with the couple in the process of adopting them. The Clinic has represented these children since 2012.  These young boys have been through far more than they, or any children, deserve at such a young age and have come out the other side with bright futures and a loving, stable home where they are thriving. Clinic students helped to secure termination of the parental rights of their abusive parents, ferreted out foster home neglect and worked to have them moved from those foster homes, and finally – with proactive efforts to help CPS in moving the search along – assisted in finding and approving the loving parents they now have.  Kayla Johnson was the student attorney to take these boys across the finish line.

Clinic Attorney Jordan Newman. Students negotiated for our clients in two successful mediations for cases that had been ongoing for almost a year. In the first, Jordan Newman, collaborated with CPS, CASA, and the parties to the case to secure a monitored return of the baby to her mother, which was our desired outcome. Jordan insisted on certain conditions being fulfilled during the period of monitoring to ensure the safety and well-being of our client.  The mother has complied, truly turning her life around, and a final order has been entered in the case reuniting this family once and for all.

Clinic Attorney Kelly Almeter. With respect to the second mediation, Kelly Almeter worked non-stop to help construct a “village” of caring people to support the return of our 1-year-old client to his young and mentally challenged parents. These parents previously did not have the support safety net they needed to ensure they could learn to care for their otherwise loved baby and ensure his well-being.  Kelly and the Clinic will continue to monitor the family for the next few months, but thus far, the mediated settlement is progressing successfully.

Clinic Attorney Tasheena Byrd. Tasheena Byrd visited her 15-year-old client, whose mother turned him over to CPS refusing to take responsibility for him, at the Residential Treatment Center facility where CPS housed him some 6 hours away from Dallas.  Tasheena was appalled by the atmosphere of the RTC – which we began to refer to as “Jurassic Park” because of the electronic barbed wire fences that enclosed the “ranch” encampment where the children lived.  Tasheena advocated for and succeeded in convincing CPS to  move our client to a much more suitable facility here in the Dallas area, where he could have visits with family, engage in normal teenage activities in a more home-like environment, and from which we expect him to transition back to family. 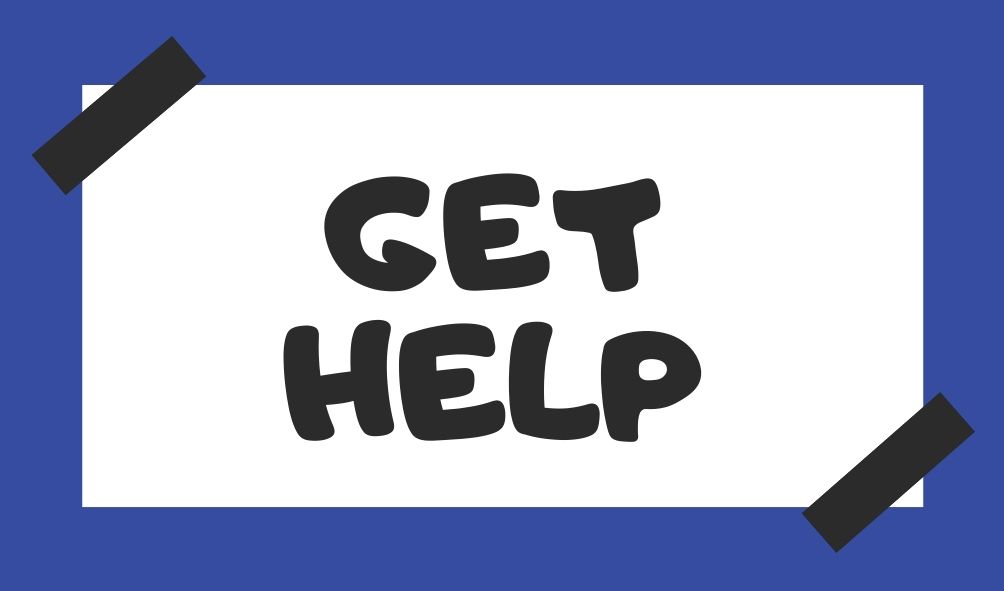 Tweets from the Caruth Advocacy Clinic