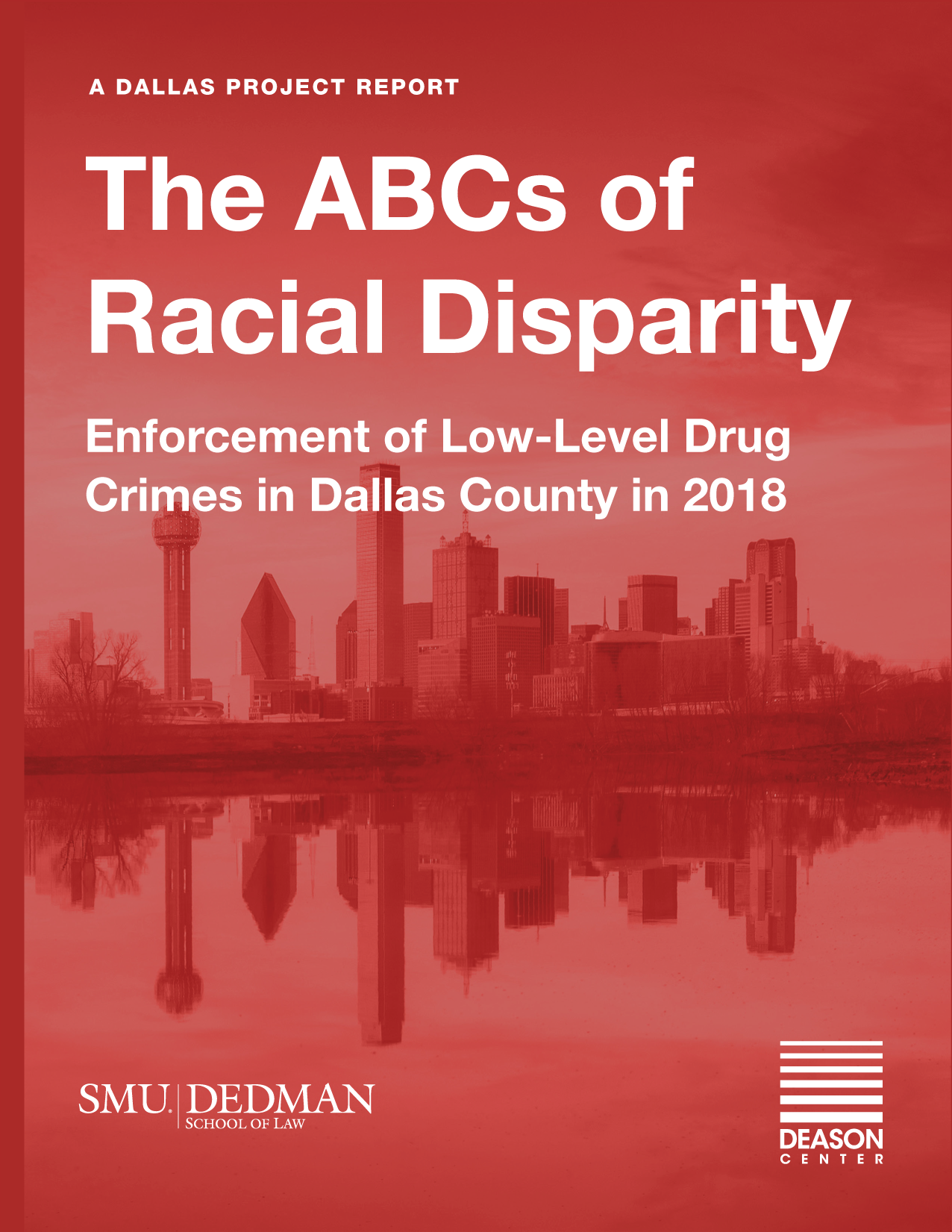 The ABCs of Racial Disparity

Data show that Black and White people use marijuana at roughly equal rates. Yet in 2018, in six of Dallas County's biggest cities, Black people were vastly overrepresented in the enforcement of low-level drug crimes. With a look at enforcement trends before the election of District Attorney John Creuzot, this study launches a series of reports about how his reforms have impacted Dallas County.

The ABCs of Racial Disparity: Enforcement of Low-Level Drug Crimes in Dallas County in 2018, Deason Criminal Justice Reform Center (May 2021).

Racial inequity in the enforcement of low-level drug laws is at the forefront of our national conversation about criminal legal reform. Across the country, elected prosecutors are using their discretionary powers to help end this injustice. In 2018, Dallas County residents elected John Creuzot to serve as District Attorney. Mr. Creuzot ran on a “progressive prosecution” platform and promised to make data-informed decisions about smart, safe, and fair criminal justice. The Deason Center’s District Attorney Learning and Leadership through Application of Science (DALLAS) Project responds to that challenge by publishing a series of reports about prosecutorial policy and practice in the Dallas County District
Attorney’s Office.

Reducing racial disparity in marijuana prosecutions was among Mr. Creuzot’s earliest priorities. In April of 2019, Mr. Creuzot announced that his office would decline to prosecute most misdemeanor cases of first-time marijuana possession. The ABCs of Racial Disparity launches a series of reports that explores the impact of this new policy.

The ABCs of Racial Disparity looks at marijuana enforcement in six Dallas County municipalities in 2018—the year before Mr. Creuzot took office. The report provides a baseline against which to evaluate trends during Mr. Creuzot’s tenure. Because Mr. Creuzot hoped that successful county-level reform would encourage similar reform in Dallas’ many municipalities, the report assesses both municipal and county data.

The report demonstrates that, in six large Dallas County municipalities, Black people were overrepresented among people cited, arrested, prosecuted, or referred to the Dallas County District Attorney for prosecution for misdemeanor possession of drug paraphernalia and marijuana. Future reports from the DALLAS Project will explore how enforcement of drug paraphernalia and marijuana possession laws changed during Mr. Creuzot’s first year in office. We look forward to sharing these reports with legal reform communities in Dallas and across the nation.

To receive DALLAS Project reports and other updates on prosecution research, register here.