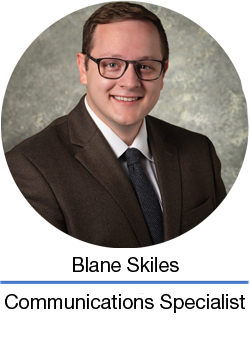 Blane Skiles joined the Deason Criminal Justice Reform Center in 2021. He was previously a journalist who covered major news events like the 2014 Ebola scare in Dallas, the 2020 election, and the COVID-19 pandemic. Before joining the Deason Center, Blane worked for NBC as a producer, helping to launch a new national TV network. He brings expertise in content creation, production, design, and strategy to the Deason Center staff.

Blane began his career as a local news producer at KSLA-TV in Shreveport, Louisiana. He held multiple roles at the station, including positions in digital marketing, audience development, and project management. He eventually rose to a newsroom leadership role, developing the station's multimedia content strategy and overseeing its execution.

In addition to his experience producing live television, Blane has produced and directed two documentary films. His work has been recognized with two EMMY awards as well as honors from the Associated Press and the prestigious National Edward R. Murrow Award.